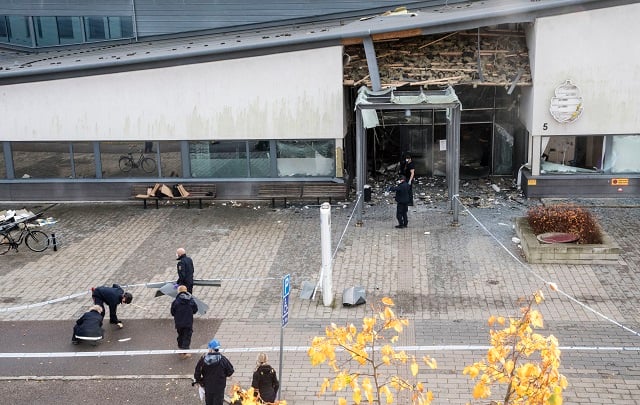 Early on Wednesday morning, the entrance to the police station in Helsingborg was destroyed in an explosion which Minister of Justice Morgan Johansson said was “a serious attack on the judiciary”.

Back in June, the Swedish Police Union presented a report suggesting that Swedish policemen have been increasingly targeted in violent acts.

“Unfortunately, I'm not surprised [about the Helsingborg incident]. We have seen several similar attacks against police stations and cars. We know that threats and violence against police have become more widespread. The police force has become more vulnerable over the past two years,” said Lena Nitz, chairperson of the Swedish Police Union.

More than 2,000 police officers responded to the union's investigation and 40 percent of them reported that they had been subjected to threats, violence or other undue influence over the past twelve months with the aim of influencing their service.

Nearly 70 percent of police officers said that threats and violence had increased over the last two years.

The same development has been observed at the Swedish Prosecution Authority. Jonas Nygren, a security specialist at the authority, told TT he has seen an increase in the number of cases relating to unauthorized influence. This includes harassment and threats of violence against individual prosecutors.

The latest survey by the Jusek union suggested that one in four members of the judiciary had been subjected to violence or threats.

And there are indications that threats are becoming more common in the judiciary. The court's own statistics show that the number of incidents almost doubled between 2015 and 2016.

“We see an increasing number of reports, in particular relating to harassment and threats,” said Anita Kihlström, who is head of security at the Court of Justice, in an email to TT. However, she said that in recent years the security team had been working to raise awareness of the importance of reporting such incidents.

“It's hard to determine what is actually an increase,” she said.

Lena Nitz said she believes that the attack on the police station in Helsingborg has been carried out by people with a history of heavy crime and the intention is to intimidate.

“They want to show that they dare to target the police. That's why it's so important to see this as an attack on democracy and to take powerful action. Trust in the judiciary's ability is at risk of being eroded and then the risk of more attacks increases,” she said.