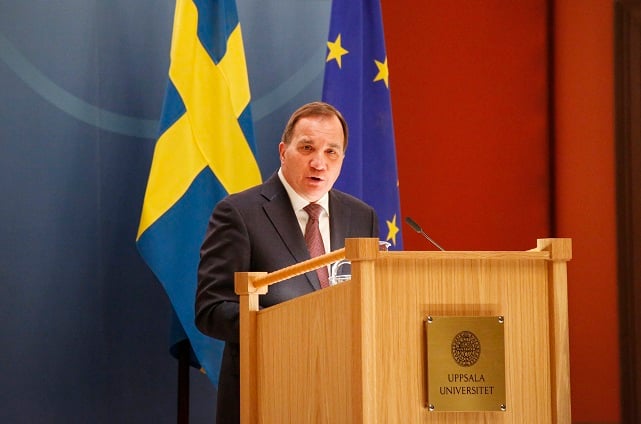 Speaking to an audience of university students and journalists in Uppsala, Löfven described cooperation between European Union member states as something “greater than ourselves”.

But he said several factors were currently putting strain on this cooperation, including the rise of populism, xenophobia, and Brexit.

.@SwedishPM starts his speech by paying tribute to Helmut Kohl. “Europe is our common future.” pic.twitter.com/7ZMJlu2Dxj

He also reminded the audience of why the EU was first established and put forward his own view of current developments in the bloc, just days after French President Emmanuel Macron renewed his calls for ambitious reforms of the union.

“The conclusion for me can only be the following: those of us who have political responsibility for Europe must shoulder that responsibility and give a better response to the challenges of the day,” said Löfven.

“Now we don’t need big new projects. Changing the EU’s treaty doesn’t solve any problems. Instead, we should focus on the important, fundamental questions where the EU gives us an added value,” he continued.

He defined these key questions as the economy, a fair labour market, the environment, common values, peace and security, and migration.

The prime minister went on to say that a 'Swexit' was “not on the table at all”, though he emphasized the importance of a good relationship between the EU and the UK, even once the latter leaves the bloc.

He added that the Swedish population would decide whether the country joined the euro, but that the government would carefully examine the question of whether to join the EU Banking Union.

“It is natural for me to evaluate how we maximize Sweden's influence in the EU,” said Löfven.

He also addressed the question of border controls, which he labelled a “necessary evil”.

Löfven said he was “prepared to compromise” in the discussions now taking place about an EU-wide migration policy. He suggested that those countries who do not do their bit to shoulder some of the burden of the huge numbers of arrivals should lose financial support from the bloc.

“As long as we have not got a functioning system in the EU, and as long as order and security can not be guaranteed, border controls will not disappear in Europe,” Löfven said.