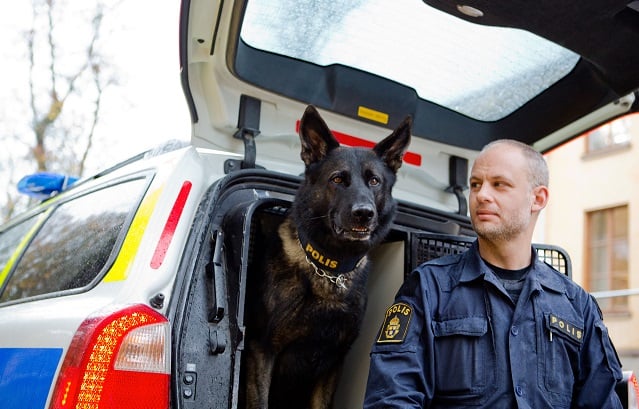 Last summer, he found a missing six-year-old girl who had been at the centre of a huge search effort.

And now the German Shepherd has been named police dog of the year.

“I didn't expect it at all, even though I knew we were nominated,” said Attack's trainer, Tommy Eriksson.

Attack has worked as a police dog for a year after he was bought from a kennel in Nödinge, north of Gothenburg. He usually helps police in the Uppsala area.

Judges praised the police pup for his enthusiasm for his work, and his ability to work well with other dogs and humans. These qualities, together with a good nose, helped Attack to find a six-year-old girl last summer who had been missing in Hudiksvall for 13 hours.

There were concerns for the girl's safety in the largely inaccessible terrain and a major search operation was quickly launched when she went missing after a family picnic.

There are caves and mining holes in the mountains from when farmers tried to look for ore in the 1930s, cliffs including one spectacular 150-metre drop, and brown bears, said police.

“Attack's achievement feels like a great acknowledgement of the work we've put in together,” said Eriksson.

Sweden's Police Dog of the Year award was given out by a jury made up of representatives from both the police and the Swedish Kennel Club.

The judges singled out Attack's work in the Hudiksvall case, in which he showed persistence, and also noted that Eriksson had the ability to understand and make use of Attack's special skills.

The Swedish army has recently been at the centre of some controversy over the huge amounts it spent on dogs, used by both the army and police force. Over a ten-year period, the armed forces bought 59 which together cost more than 12 million kronor ($1.46 million).