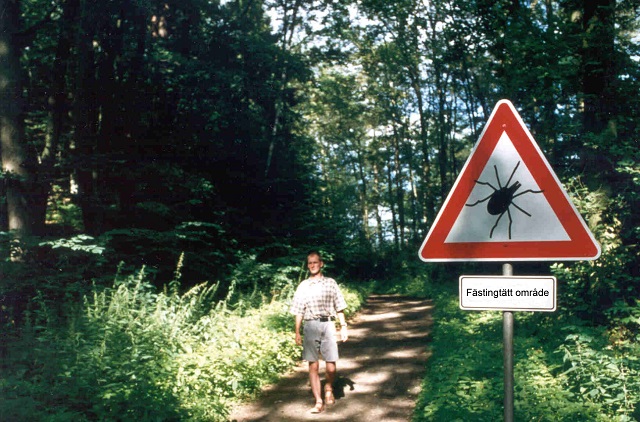 A sign warns of ticks in a wooded area. Photo: Baxter / SCANPIX

Scientists hope to be able to begin animal testing of the vaccine in around six months, as the number of cases of the disease continues to rise across the region.

“It’s still at the research stage. It’s a long way from the stage where we can give it to people,” said Per-Eric Lindgren, a professor in medicinal microbiology at Linköping University.

There is currently no medicine which cures or treats TBE, but vaccination can protect people from the disease.

The new edible vaccine is being developed as part of Scandtick innovation, a three-year research project involving Swedish, Danish and Norwegian partners working to reduce the threat of tick-related infections to men and animals.

“We have developed better and safer diagnosis of Lyme Disease and edible vaccines for TBE,” said Lindgren, the project leader. These are the two most common tick-borne diseases

TBE is carried in ticks’ saliva, usually if they have bitten and sucked blood from small rodents, and is spread to humans and animals through bites. It causes an inflammation of the brain, and symptoms include a high temperature, severe headache and in some cases cramps, though most who contract the disease make a full recovery.

Up to a third of those affected, however, suffer from permanent problems including tiredness and memory disorders, and in rare cases even paralysis.