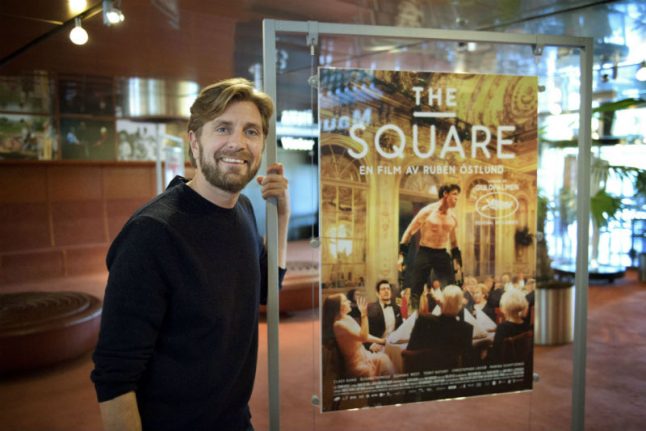 It was more of an apologetic retreat than an ostentatious flounce, but one critic decided he'd had enough two hours into Ruben Ostlund's Palme d'Or-winning “The Square.”

As he left the Beverly Hills screening room, muttering, a man on screen pretending to be an ape was busy violently assaulting a female guest at a black tie dinner.

As unforgettably strange as it is provocative, Ostlund's fourth feature was announced this month as Sweden's entry at the Oscars for best foreign language film.

It would be unfair to describe the movie, with its unwieldy 142-minute running time, as divisive since it has an impressive 77 percent approval rating on film website Rotten Tomatoes, but it certainly is polarizing.

Amid the many plaudits, Entertainment Weekly's Chris Nashawaty thought it “tries so hard it's practically sweating,” while A.O. Scott of the New York Times said the movie was “ultimately complacent, craven and clueless”.

“I'm not doing movies to be loved by the audience, I'm doing movies because I want to raise questions about a topic or theme,” Ostlund, 43, said in a recent interview with AFP.

“The Square” — which opened theatrically in the US on Friday — stars Danish actor Claes Bang as Christian, the respected curator of a contemporary art museum, a divorced but devoted father-of-two with a social conscience.

Christian discovers how difficult it is to live up to his own ideals in a foolish response to the theft of his phone that drags him increasingly deeper into trouble.

Meanwhile, the museum's PR agency creates a literally explosive viral campaign for his next exhibition, “The Square,” provoking a backlash that sends Christian, as well as the museum, into an existential crisis.

Bang is relatively unknown in the English-speaking world but the movie benefits from extended cameos by recent Emmy Award winner Elisabeth Moss (“The Handmaid's Tale”) and Dominic West (“The Wire”) that viciously lampoon the art world.

The famously meticulous Ostlund, who tends to shoot up to 40 takes for each scene, encouraged the first Hollywood stars he has worked with to pace themselves, leaving enough energy for those all-important end-of-the-day takes.

“Elisabeth, when she came to Sweden, she was like, 'I'm going to have a holiday here. This is going to be easy, I only have five shooting days,'” Ostlund recalls.

“But she was very open with saying, 'This is the hardest thing I've ever done.'”

Ostlund sparked amused headlines at this year's Cannes Film Festival when he jumped up and down, shouting, “Oh my God, oh my God!” after winning the Palme d'Or, one of global cinema's most coveted honors.

Unabashed in his excitement at the possibility of adding an Oscar to his trophy cabinet, the director makes no apologies for playing the annual awards merry-go-round.

“I think some directors are film nerds that have been in their boy-rooms, looking at films, since they were 12 years old, and not very social creatures,” he tells AFP.

“I 100 percent understand that they don't enjoy the circus around it, all of them. But for me this a part of the job.”

Born on a small island off the west coast of Sweden, Ostlund decided to go to film school in Gothenburg after making extreme skiing movies when he lived in the Alps in the 1990s.

Hollywood's gilded doors opened to the director when his 2014 black comedy “Force Majeure” — which explored family relationships fractured after an avalanche at a ski resort — won one of the smaller prizes at Cannes.

One of the most disquieting set-pieces in “The Square,” featuring animal movement expert Terry Notary (“The Hobbit”) as a wild, bare-chested man performing as an ape wreaking havoc at a posh gala dinner, immediately entered Cannes legend.

“I enjoy when you are watching scenes that have this awkward feeling. It's actually stimulating you in this same way as watching violence in movies,” Ostlund says.

“We don't have to participate. We can look at it and be horrified, but we are safe.”