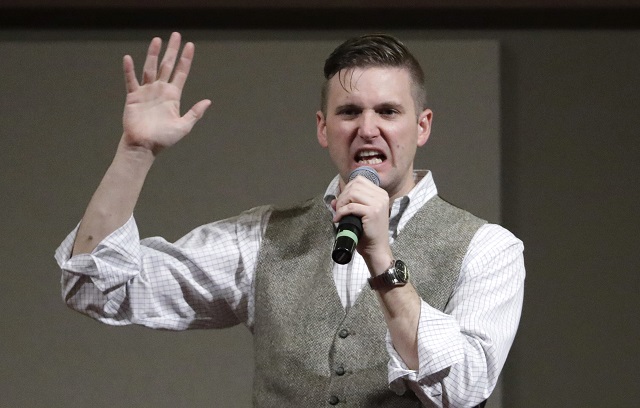 The Identitarian Ideas X event had been planned for Saturday, November 4th by far-right blog portal Motpol, and Spencer, a prominent activist for the so-called alt right, was set to be keynote speaker.

But on Monday the organizers announced on the website of far-right publishing company Arktos that the conference had been cancelled after receiving indirect “indications from Swedish authorities” that Spencer  would not be allowed in the country.

The statement did not explain the nature of these alleged indications, but claimed:  “The fact that our opponents fear what we have to say that they stoop to threats of travel bans and extensive sabotage to prevent peaceful conferences is a testament to the power of our message and proves that the alt-right are indeed the only true opposition to the globalist agenda.”

It also said that there had been “a wide-spread campaign to prevent us from hiring venues in the Stockholm area”. The Local contacted Arktos and Daniel Friberg, one of the organizers and a co-founder of Motpol, for comment, but they had not responded at the time of publication, while Swedish daily Aftonbladet reported that Friberg hung up the phone after a request for comment.

Spencer has called for “peaceful ethnic cleansing” and was a featured speaker at the violent Charlottesville Unite the Right rally which led the Virginia governor to declare a state of emergency and in which one woman was killed when a car was driven into a group of counter-protesters. He is also a 'strategy adviser' for the Nordic Alt Right, an organization based in Scandinavia of which Friberg is one of the founders.

Billed as a “small VIP gathering of supporters”, there were only 100 tickets available for Saturday's conference. They were sold at $74 (approximately 620 kronor) each, including a meal. Organizers have promised arranged a smaller event with other speakers to replace the conference on Saturday.

READ ALSO: Meet the Swede who went undercover with the alt right for a whole year

Spencer had also planned to attend a conference in Poland while in Europe, but cancelled the entire trip after the Polish Foreign Ministry said the views he promoted “could pose a threat to all those who hold dear the values of human rights and democracy”.

In a statement, the ministry went on to say Spencer's views were “in conflict with the legal order of the Republic of Poland”, and though it did not say the white nationalist would be denied entry, Spencer told BuzzFeed News: “That's what they were threatening.”

Statement: MFA is opposed to any visits to #Poland of people who propagate racist, anti-Semitic and xenophobic ideas. pic.twitter.com/w1pjzdGXr0

Spencer was previously deported from Hungary in 2014, when he tried to organize an informal conference there after a meeting of his white supremacist think tank, the National Policy Institute, was banned. After that, he was banned from the entire 26-country Schengen area, which includes Sweden and Poland, for three years.