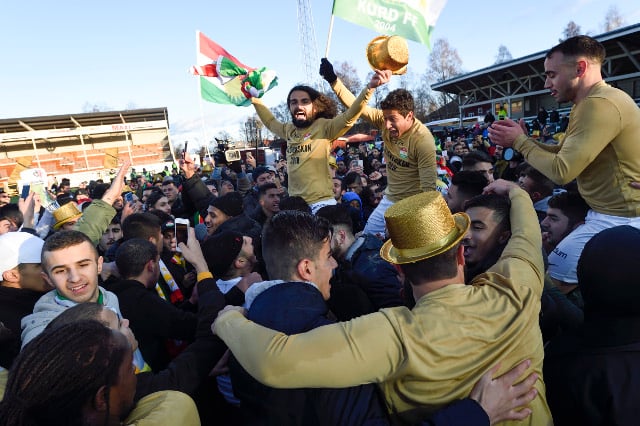 Despite their humble status on the pitch, with more than 1.5 million Facebook followers Dalkurd are the most-supported club in Sweden by some distance, while their focus on helping newcomers to integrate also sets them aside from other teams. Two days after their promotion, The Local spoke to chairman and co founder Ramazan Kizil about the club’s incredible and unlikely history.

The club was founded in 2004 by immigrants in Borlänge, a small town in central Sweden. Can you explain why you decided to form a football team?

When we came to Sweden, we got so much freedom and security. At home we couldn't get a single night's sleep without fear, but in Sweden you sleep well without any worries or bad thoughts. So we were always thinking: we got so much from this country in terms of security, freedom, opportunities, the chance to develop, to establish ourselves, our kids, our friends, and we were always looking for something to give back to this country, to Sweden and Swedes.

On top of that I also knew a lot of the youngsters as I own some bars, and in Borlänge it was a bit chaotic at that time: drugs, gangs, things like that. I knew many kids who had given up on school and fallen into different criminal groups. So we talked among ourselves all the time, relatives, family, about what we could do. Then one day, Elvan Cicen came to me, who was captain of a youth team at (fellow Borlänge club) IK Brage, and explained to me that he and a whole team were being kicked out of Brage because of disciplinary problems. They were almost all immigrants, aged about 15, 16.

So when he told me I said: right, I've found the solution. Let's use football for integration, for a route into society, and through that get their parents involved. Because it's not the kids who have the problem with integrating and fitting in, it’s their parents. And football can be used as a method of taking these people from alienation to fitting in to society. That's the club’s first and biggest responsibility: to take care of these kids even if they have some problems with discipline, things like that. So we started with that.

So Dalkurd is an example of how football and sport can help integration?

There were two things we thought about from the start. The first: don't forget about Sweden. And because I'm Kurdish at the same time, we wanted these two things to complement each other.

So: Kurdish and also Swedish. From the start we had a clear goal to not be like other clubs. Because in Borlänge there are 14 different clubs, so if we were going to do the same thing we wouldn't be needed. We thought that the things other clubs don’t do, we'll do. We wanted to use Kurd in the name so it wouldn't just be football that would draw people in – the Kurdish name and colours would mean many other people would take an interest beside the football. So the name meant we were a bit different.

Something people may not be aware of is that you’re the Swedish club with the most followers in the world, if social media followers are taken into account. For a team that has never played in the top division, that's highly unusual.

We're a Swedish club and we represent Sweden in competitions and also international competitions if it comes to that one day. But on top of that… there are people who maybe don’t get the real meaning of this Kurdish name and using Kurdish colours – how tough it has been. Using those meant many people who aren’t bothered about football care about us and follow us. There are almost 50 million Kurds across the world, remember. So in a way the team has become a sort of unofficial national team for Kurdish people?

Yes, something like that. But the social part of Dalkurd will never disappear – that is fundamental for us. So those are the two things that make us popular, and different.

A 1-0 win over Gais on Sunday meant Dalkurd won promotion to Allsvenskan. How does that feel

Personally…I try not to think too much about the wins, but rather for Kurdish people, who had forgotten this kind of feeling of happiness, who had lived in misery, been imprisoned… when you have success with this name in Sweden, those people who have forgotten how to be happy, they get a little bit of happiness from what we’ve done. And when you see them being happy because of our work, you feel happy too. That's when the emotions get big.

A lot of people will want to come and see Dalkurd play in Allsvenskan… but the questions is where will you play? There still isn't an Allsvenskan-approved stadium in Borlänge, and the season will start in around five months.

That's a bit sad actually. We really don't understand this, it's something that has been going on for several years, where we’re arguing with the municipality. We’ve long said we had the goal to play at the highest level, and the municipality as a public institution perhaps doesn’t have 100 percent responsibility to provide an arena, but from the start we've said we just want to know, so are you thinking of making a stadium of that category in Borlänge? Not just for one club, or one division. Does Borlänge need a stadium like this or not? You decide.

But we've not had a clear answer from them. It’s never yes or no. So since we set the goal of playing at the highest level domestically, and even international level, we have to have a ground to play in. And as long as there isn’t one in Borlänge, we’ll look for one that is. That’s an absolute must. I mean, what should I say to my sporting director and players, next year? “Nah, we don’t have an approved ground, so you'll have to play in Superettan (the second division) or Division 1 (third division) instead?”

When do you have to decide?

Look, it’s not an argument that has taken place over one day either. They’ve known about this issue since Brage played in the Superettan in 2013. Then the municipal council took a decision to build a stadium for 50 million kronor. Brage had the goal to win the Superettan and get promotion to the Allsvenskan at that time, that’s why they took the decision to build an Allsvenskan approved stadium. They had a consultation, paid out money to look into what was needed for this ground etc.

But then Brage got relegated. Then we got promoted the next season, with the goal of playing Allsvenskan. Yet that decision got left behind and hasn’t been acted on, on the basis that we’re called Dalkurd, not Brage. I’m not optimistic about a solution, they’re just talking, there's no action. Dalkurd fans celebrating at the club's current arena, which is not fit for the Allsvenskan. Photo: Ulf Palm/TT

Is the club ready to move if needed then? There has been speculation about Stockholm or Uppsala.

We're being forced to. If there isn't an approved stadium in Borlänge, we'll look for an alternative. That's something you can't mess with.

It's a shame for the supporters, who will perhaps have to travel to a different city to see their club in the top division

Then there's also the fact that we're not just a team playing in Allsvenskan, we have 400 youths at the club too. We have a social group that works with kids who have had problems. We have 20 immigrant girls who are part of a dance group. We help clean Borlänge, we hold night neighbourhood watch walks in Borlänge. We go to schools and help kids. But that means nothing to them, so long as we’re called Dalkurd. Could there be even more to celebrate for Dalkurd in the future? Photo: Ulf Palm/TT

To end on a more positive note: on the pitch, what is the long term goal for the club now it’s going to be playing in Allsvenskan?

We don't have long-term goals, but shorter ones. I usually stick my neck out, and in the beginning nobody believed me but when we end up achieving them they’re shocked. So we don’t have a long-term goal, but rather a short-term goal: to win the Allsvenskan next year. That’s the goal, to win the league next year.