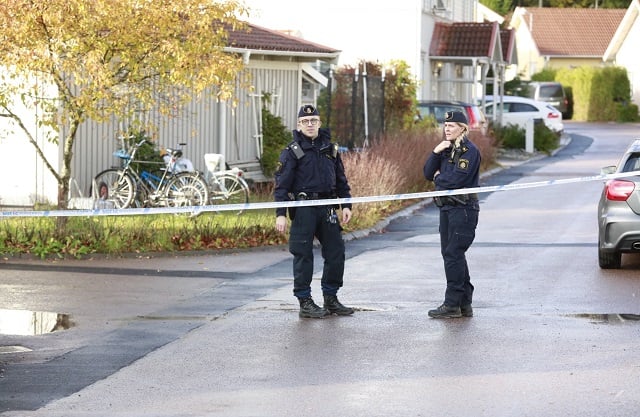 Police stand outside an officer's home which was shot on Saturday. Photo: TT

His statements come in the wake of several attacks on police stations and officers' homes.

On Saturday, a man was arrested for attempted murder in Västerås after firing at least 12 shots at a police officer’s home, and on the same night a police station in Växjö, southern Sweden was attacked with fireworks and cobblestones.

Earlier this month, a police station in the southern Swedish city of Helsingborg was badly damaged by a powerful explosion, and in August, a man stabbed a police officer in an unprovoked attack in the centre of Stockholm. Several of these attacks are thought to be linked to local gangs.

Politicians have condemned the attack in Västerås, with the biggest opposition party, the Moderates, calling for harsher penalties and tougher gun laws.

“It is extremely important that we show how seriously we take this gang crime,” the Moderates' legal spokesman Tomas Tobé, who is also chairman of the Justice Committee, told the TT news agency. “The police also need to get more support than they have today. We need to get political changes that show that we are standing up for Swedish police.”

The Swedish Police Union has also raised concerns over the rise of violence, and noted that it could lead to people leaving the profession. A survey carried out by the union showed that 70 percent of police officers believe vulnerability has increased over the past two years.

An investigation known as Blue Light is currently underway to examine the possibility of giving police increased compensation for offences at work. “We're working with the directive of the investigation and it will come in a few weeks,” Justice Minister Morgan Johansson told Dagens Nyheter.

Johansson said the government had already increased punishments for around 30 crimes, including harsher threats for threats made with allusion to gang membership, and violence and drugs offences.

In addition, the penalty for serious firearms offences will be increased on January 1st next year, making it possible to detain suspects, as well as to carry out wire-tapping.