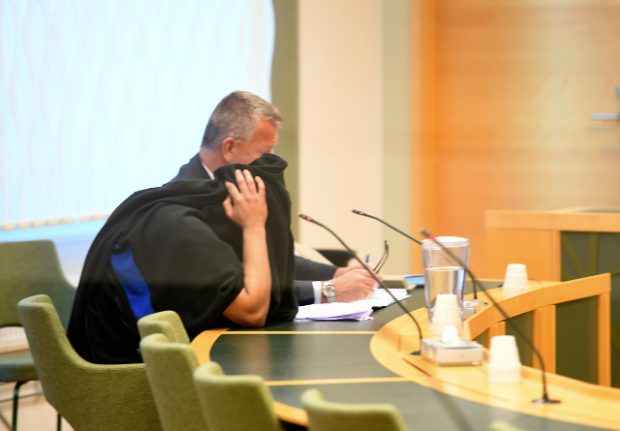 The man sitting at the remand hearing with his head covered. Photo: Fredrik Sandberg/TT

The incident occurred in the early hours of Saturday morning, when several shots were fired from a high calibre weapon at the home of the police officer and his family in the small Swedish city. The two adults and two children, who were sleeping in the building at the time, escaped without injuries but were moved to a secure location by officers.

The man was arrested later on Saturday for attempted murder. According to tabloid Aftonbladet he has nine prior convictions, including for assault, narcotics crimes and reckless driving.

On Tuesday morning he was remanded in custody for attempted murder on reasonable grounds (the lower degree of suspicion according to Swedish law) following a hearing at Västmanland District Court. There was a significant police presence at the hearing, and officers armed with automatic weapons escorted the suspect in. The remand document, seen by The Local, explains that there is a risk that the man could destroy evidence or continue committing crimes and he should therefore be kept in custody.

Earlier in the week Sweden's national police chief Dan Eliasson described the incident as an “attack on all of society”.

“These are cowardly people who try to get to the people who are fighting for the safety and security of others through their relatives. There is only one way to deal with this kind of serious violence and it is with even more force,” he said in a statement.

On Monday, the Swedish government promised to better protect the country's police officers following a string of attacks on stations and officers' homes. Along with the incident in Västerås, a police station in Växjö was attacked with fireworks and stones on the same day.