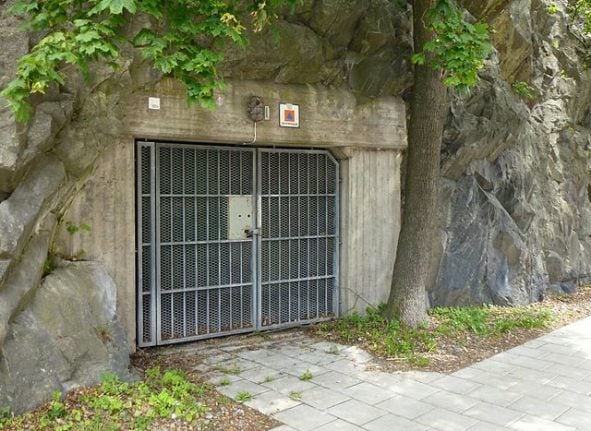 The entrance to one of Sweden's shelters. Photo: Holger.Ellgaard/Wikimedia Commons

The shelters, housed in apartment and office blocks, garages, and built into mountains, are designed to keep Sweden’s population safe in the event of war or an attack.

They would protect residents from “all weapons that could be used”, according to the Swedish Civil Contingencies Agency (MSB), including shock waves and shrapnel, biological weapons, fire, and ionizing radiation.

“The first shelters were built during the 1940s to protect civilians from a potential air raid, but most of them were built in the ‘50s and ‘60s during the time of the threat of nuclear war,” Ove Brunnström from the MSB tells The Local. In 2002, the government decided to stop actively building bunkers, but earlier this year, it asked the Swedish Civil Contingencies Agency (MSB) for a report on the country’s level of preparedness for war, and the MSB advised the creation of new shelters. So what's changed?

“In 2002, the situation in Europe was such that there was no need to build more shelters, so very few have been built since then, but unfortunately, that situation changed in 2014,” explains Brunnström. “Our government decided we should start to plan for war again, like we did before 2002.”

The agency had carried out some checks on the shelters over the past 15 years, Brunnström says, but typically only on 1-2 percent of the total number each year, meaning many had not been inspected for over a decade. He adds: “People’s knowledge of the shelters is currently at quite a basic level, I think, and informing foreigners could be a problem. We have information on our website, but it’s almost all in Swedish.” After this year's report, which also included assessment of Sweden's warning systems, evacuation plans, and equipment such as gas masks, the MSB advised that existing shelters be updated, and recommended that the government build new shelters, with space for 50,000 people. This would be a huge project, expected to span ten years and cost two billion kronor (around $238 million).

“As the threat level is today, the main priority remains protecting against conventional warfare, This has been the case since the 1970s when we went back to building normal shelters – small shelters to protect from a conventional attack from land or air, rather than the large shelters,” says Brunnström.

Sweden has ramped up its military spending over recent years and reintroduced military conscription earlier, in the context of a less stable situation in the Baltic region, reports of Russian spies in Sweden, and Russian fighter jets sighted close to the Swedish border.

A further sign that Sweden is taking national security increasingly seriously came last summer, when for the first time in a decade the country stationed a permanent military force on the island of Gotland, a key strategic location in the Baltics. Sweden is neutral and for this reason is not a member of NATO, leaving it to rely on its own resources for national security. But in terms of shelters, Brunnström points out that the country is already extremely well protected compared to most others, with only Switzerland boasting a higher rate of coverage for the population.

“There’s coverage for 70 percent of the population, though we don’t know if these [shelters] are all in the right places,” he says.

The MSB has recommended new shelters be built in Stockholm, Norrbotten county in the far north, the island of Gotland, and the Öresund Region encompassing Malmö, which Brunnström says are the areas considered a priority in the case of a possible attack. However, it will be up to the government to decide if and where they build the new bunkers, and the agency is waiting for an official response to its report.

Sweden's shelters are identifiable by a sign showing a blue triangle in an orange square, with the word ‘skyddsrum’. Residents aren’t assigned to a particular shelter but instead should go to their closest one if war breaks out — the locations of the existing shelters are marked on the map below.

This won’t happen overnight, however: should the Swedish government decide that the country is at risk of war or an attack, the owners of buildings where there is a shelter will be required to prepare it. This is expected to take no more than 48 hours, and the shelters should be habitable for up to three days.

Each person in the shelter will have at least 0.75 square metres of space, and the rooms are equipped with a water supply, heat, toilets, and ventilation. Pets cannot be brought into the shelters due to the risk of possible allergies.

Many apartment blocks have what is termed a ‘normal’ shelter in their basement, built to house around 100 people for up to three days. But other bunkers, built during the time of the nuclear threat, are much, much bigger. The Katarinaberget skyddsrum on the southern Stockholm island of Södermalm, for example, was the world’s largest nuclear bomb-proof civilian shelter when it was built in 1957. Today it is used as a car park, but stands ready to hold 20,000 people should disaster strike.