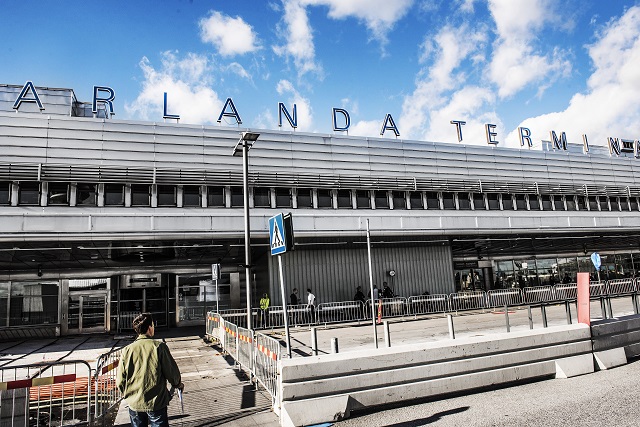 The man was banned from Sweden over a bomb threat against Arlanda airport. Photo: Tomas Oneborg / SvD / TT

According to court documents seen by The Local, the man said his reason for coming to Sweden was “to commit a terrorist attack” and not to collect his cat as he had initially claimed. The court did not appear to find the threat credible however, as it was not addressed in its ruling.

He was stopped at a border control in late October this year, while travelling by bus from Copenhagen, the documents show. He was detained on charges of breaking Sweden's foreign citizens laws (utlänningslagen), for which he has now been sentenced to a month in prison, while his lifetime ban from the country remains in place.

Initially, the suspect said he had come to Sweden in order to fetch his cat, a pet named Gosoya. The animal has been kept at a cat hotel in Borås for three years after the suspect's arrest in Sweden.

He has regularly paid the fees for the cat's stay and prior to his trip to Sweden, he told the cat home that he was coming to pick up his pet. But the court documents state that the story of fetching his cat was merely given “so that he would be released”.

In fact, the man has a history of threats to airports and aircraft. In 2014, he claimed there was a bomb in the luggage hold on a flight between Denmark and Norway, which caused the plane to carry out an emergency landing at Gothenburg's Landvetter airport. One year later, he made a bomb threat against Arlanda airport and was subsequently banned for life from Sweden.

Asked if there was any weight to the man's latest threat, prosecutor Helena Lundström told TT that this was not mentioned in the ruling, but that “the important thing is that he cannot come back to the country”.

Earlier this year, the suspect told Swedish daily Aftonbladet, after claiming responsibility for yet another threat to an aircraft, that his aim was to be jailed in Sweden as a protest against Swedish authorities.

“I demand justice. I put myself in prison. It's a protest,” he said.

In a video posted online, the man has admitted to making “false reports about bombs at airports” in an attempt to be extradited to Sweden, saying he was forced to do this to “attract attention”.

In 1993, he hijacked a Russian plane and threatened to blow it up. The goal had been to fly the aircraft to the USA, but it made an emergency landing in Stockholm where he and his wife were arrested; they were later sentenced to 12 years' imprisonment in their home country after applying for and being denied political asylum in Sweden. It is this decision that he said in the video he wishes to protest.