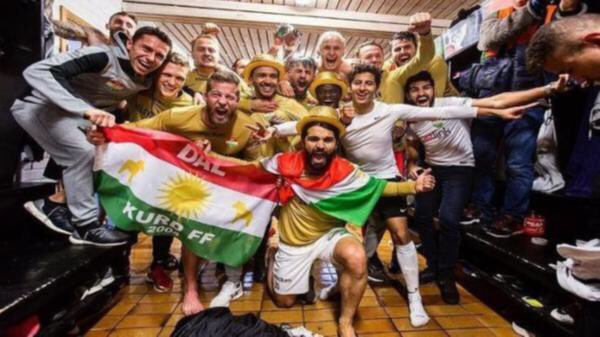 The subject line of last week’s newsletter was about how the success of a little Kurdish team football team in Sweden, Dalkurd, can generate a world-wide echo and generate national pride.

As a Kurd from Turkey, I was of course charmed by the team’s achievements. It got me thinking about how football can function as an identity indicator in a minority context. It even led me to discover that Kurds and Sweden’s indigenous Sami people played a match in 2008 – but more on that later.

First, why did the team’s result have the news value?

The coach of the team explained that “We were forced to leave because of our ethnic background…When we came to Sweden, we got so much freedom and security…we were always looking for something to give back to this country.”

This made me wonder, why did he have to leave his country to find such opportunities?

To get some perspective, I decided to look at three minorities: Kurds from Turkey, Catalans from Spain, and Sami people from Sweden. What kind of role do their football teams play when it comes to representing their identity?

I first had a talk with Pol, a pro-independence Catalan student at Lund University, who claimed that 90 percent of pro-independent Catalans support Barcelona football club.

He thinks that Barca has always been the defender of Catalan institutions, standing for democracy, transparency, and respect for others.

He mentioned one symbolic match the Catalan national team play every year, describing it more like a festival or demonstration.

People wave flags, sing folk songs and celebrate their nation. The Barca team and stadium are such Catalan symbols that when people made a human chain from the north to the south of Catalonia in 2013, they went right through Barca stadium on the way.

He also mentioned the existence of hundreds of small Catalan teams, many of which have Catalonian figures in their logos.

What I understood from my conversation with Pol is that, in Catalonia, football is sort of a celebration and gathering tool within the community. Football brings this minority community together and helps strengthen their identity.

But what about minorities who don’t have any sort of state recognition?

In the Kurdish context, I can say that the Amedspor football club is the leading Kurdish team in Turkey. The team has been subject to repression, including being refused hotels, having players fined, and being forced to play in an empty stadium after fans showed a banner that was seen as political.

As part of my research, I googled Kurdistan football and I ended up on a page about an alternative league – CONIFA (Confederation of Independent Football Associations):

“The Confederation of Independent Football Associations is a global umbrella organization for national teams not under the auspices of FIFA – representing nations, minorities, isolated dependencies or cultural regions.”

CONIFA aims to be a bridge between minority communities, and in 2008 it hosted a semi-final between a team from Kurdistan and one consisting of Sami people, an indigenous minority population in Sweden, Norway, and Finland.

It made me wonder, how does football become about more than the 11 players on the field? How much is it related to nations’ self-completeness?

Sandra from Lulea University was there to help me out.

“I have grown up in a parallel culture. One foot in Sweden and the other foot in the Sami. I have grown up with being depressed in Swedish school and never fitting in,” she explained.

“I have heard government after government in Sweden condemn how other countries treat their minorities, but at the same time, they treat their own minorities with silence and exclusion. We have always lived with a feeling of us and them.”

Sandra’s candid words were familiar to me, a Kurd growing up in Turkey, yet they still managed to depress me in terms of my expectations about living in a new country.

When I asked her about how football works in Sami’s own culture, Sandra stressed the amazing atmosphere during the Sami national team games. She added, however, that as long as the Sami continue to struggle with self-determination, it becomes difficult for them to view the team as a true “national” team for Sami.

In the case of the Sami, it seems, football perhaps doesn't have the same power to unify the community and strengthen their “national” identity as is the case in Catalonia.

While football may be a game played with just 11 people on the field, it's a game that involves and affects many more people than just the players.

It about the thousands or perhaps millions of people who support and are inspired by those 11 players, and how they can represent something larger — a community, real or imagined.

It can bring joy and frustration, and the ball on the field — like conditions in life — may not always seem to roll fairly.