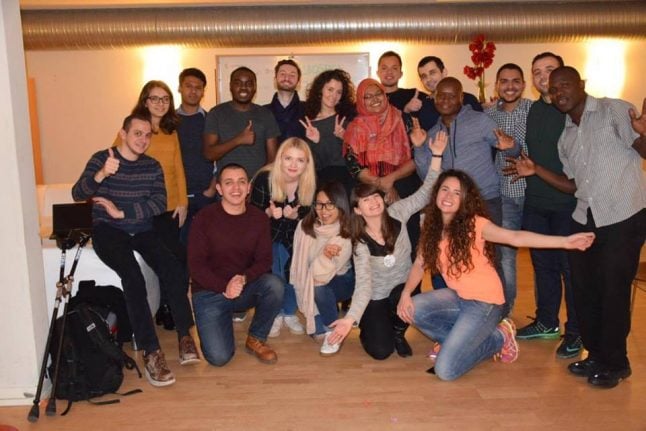 The Lund Local Network is all smiles.

Tea, who is originally from Georgia, is studying a one-year master’s programme in Entrepreneurship and Innovation at Lund University.

Prior to arriving in Sweden, she’s worked on projects in the public, private, and NGO sector related t empowering people, such as organizing trainings, events, and other educational projects.

After getting interested in entrepreneurship while studying in France on an Erasmus, Tea decided to pursue a master’s in Sweden and applied for an SI scholarship.

What role does the Local Network have for the NFGL community in Lund?

The main value of the network are the members themselves, all of whom have different backgrounds.

Therefore we can learn from each other, become partners, and as future leaders, build relationships among each other and with Sweden that will be valuable for us, our countries and the world, in general.

Therefore, I see the role of the Local Network to strengthen valuable and lasting connections among each other and with Sweden, develop leadership skills, and be active in society.

Describe the handoff. What did you learn from your predecessor?

The previous board members did a great job in handing off the duties. First, the elections were very well-organized. The ones who were interested to be on board could nominate themselves and had to present for one minute as to why they wanted to be elected.

After the pitches, people voted in a secret ballot and the votes were counted. I was very happy to be elected from among the three nominees who ran for the chairperson position.

Moreover, the previous chairperson and the board members shared their experience with the newly elected board and gave some recommendations and tips for preparing our application and managing the work, in general.

I learned for example, that social gatherings are necessary and we should focus on that in addition to our main events. Also, we learned many smaller details, like the best days to organize events, where to book rooms, etc.

When was your first meeting? What did you do?

Our first meeting was soon after the elections when we gathered all four board members and the people who were interested organizing events.

We used a shared Google Document so everyone could write down event ideas. The day before the meeting, the number of suggested events doubled – which was amazing.

When we met, we tried to merge similar ideas, form organizing teams, and check various details, such as budget, time, and that they were within the scope of SI guidelines.

In the end, we ended up with 19 events and around 15 contributors. It was important to give everyone the opportunity to be involved and contribute to the network and we’re proud that we managed it.

I think we successfully set the stage for an active and interesting year. Now we have to follow our plan to implement each event.

The board has prepared a set of guidelines on how to organize events and how the board will support that activity. We believe it should not be only the board who organizes all the events.

Rather, the idea is that initiators and other interested members should be engaged in organizing events and the board will assist and support them.

This week we have our first event, Photo shooting for Online Presence, which aims to help SI members improve their professional online profiles, such as LinkedIn.

In addition, we decided it’s important to have social events each month, so this will be our goal as well. We already had one mingle, where around 30 people showed up, it was a nice evening where we had icebreaking games to get to know each other and mingle.

How do you expect to interact with other international students? Other Swedish students?

We plan to organize events that will be open to everyone. Moreover, we want to organize some joint events with other student organizations and networks.

Additionally, we asked the network members to vote for the logo of the network from three options and made a Facebook page for our Local Network. This will raise the awareness about the network and its members among other international and Swedish students in Lund and facilitate communication.

What do you hope to accomplish during your time managing the network?

I hope to do as much as possible to facilitate members to strengthen the network among each other and other students and actors in Lund and Sweden.

I also hope that the SI NFGL Lund Local Network will organize interesting events that will help participants learn more about different areas, expand their horizons, and develop valuable skills.

I hope many people will be active and contribute to the network, organize events, and develop their event management and leadership skills. I also hope to build a good structure in the network, so that it will be easier for the next board to operate.