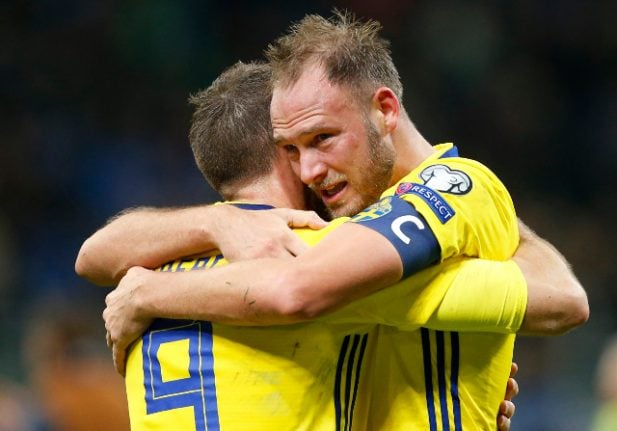 Italy, who have not missed a World Cup since 1958, dominated possession but struggled to create enough clear-cut chances, thanks to a solid performance by the Swedish defence in aerial duels.

Without star Zlatan Ibrahimovic, who retired from the national team after Euro 2016, Sweden sealed a return to the world stage after failing to reach the last two editions.

“With Ibrahimovic we played differently. He’s retired and he’s a great champion. So we adapted and we play in another way now.”

The stalemate meant Sweden advanced thanks to a 1-0 victory in Friday’s first leg in Stockholm.

“Wasted chances, a bit of bad luck but zero goals in 180 minutes against the Swedes, who will go to Russia,” Italian sports daily Gazzetta dello Sport commented, making clear its view that Italy had not done enough to earn qualification.

While Italy's veteran keeper Gianluigi Buffon bowed out with a tearful farewell after missing out on his sixth World Cup finals appearance, Sweden captain Andreas Granqvist was also in tears on Monday.

The 32-year-old is also expected to retire after the tournament in Russia next year.

“I’m proud. This was definitely my last shot at playing a World Cup,” he told Swedish media.

In their most ecstatic moments of celebration, the overjoyed Swedish team even knocked over Eurosport’s pitch-side studio while coach Andersson was being interviewed on live television:

Andersson took over as coach after Erik Hamrén stepped down last year. He was previously best known for guiding Norrköping to the 2015 Swedish title, the team's first such success in a quarter of a century.

He is known for placing a strong emphasis on team morale and behaviour off the pitch, saying in one of his first speeches as coach: “To me it is about respect. There should be order, we should be nice to each other and I don't want anyone else to have to pick up our crap. Those are important values to convey even to the players.” Indeed, he was pictured after Monday's match cleaning up the Swedes' changing room: