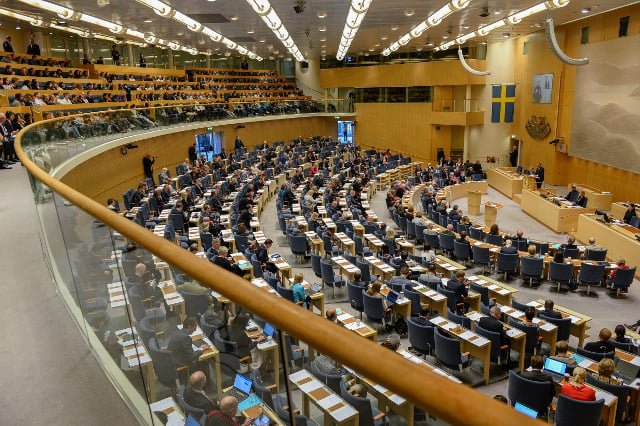 Globally, there has been “continued and steep democratic progress” over the past 40 years, but this progress has slowed during the most recent decade, according to the first edition of the institute's report, The Global State of Democracy, which was launched in Stockholm on Wednesday.

The report assessed the state of democracy worldwide, and reported advances in most aspects of democracy. Researchers looked at factors such as how many electoral democracies established within that period survived, how representative governments were of their constituents, how well they respected their citizens' fundamental rights, and how far the country's judiciary, media and parliament are able to keep governments in line using checks.

“The world changes, and so do the challenges to democracy,” said Swedish State Secretary to the Minister for International Development Ulrika Modéer at the launch of the report, attended by The Local. “Today, probably more than ever before, it is not only our moral obligation but also in our vital interest to support democratic development throughout the world.”

“Sweden seeks to pave the way for people to assert and actively exercise their civil and political rights, and thus influence the right conditions in societies in which they live,” Modéer continued, adding that the report would help the government to “make well-considered decisions and to tweak our efforts to be better suited for their purpose.”

In Sweden, one of the key challenges was ensuring the involvement of immigrants in democracy. The report labelled Sweden as an “immigrant-friendly country” and noted that along with Finland and Norway, its policies “focus on ensuring that immigrants have equal legal rights to those of citizens and a high level of integration support”. However, there was still a lower rate of voter registration and turnout among immigrants.

READ ALSO: Sweden is 'in the process of dismantling democracy': ex-Social Democrat head

Researchers also noted that concern about the effects of immigration had also led to a rise in popularity for anti-immigrant parties, in Sweden as well as in other countries such as Australia, the Netherlands, Austria, France, and Germany.

This could be one factor behind a shift in policy from a focus on multiculturalism to an emphasis on 'adaption' and 'integration', therefore putting the onus on newcomers rather than native citizens, the report said.

In total, data from 155 countries relating to the period 1975-2015 was analyzed, with 1975 chosen as the starting point because it was the year in which the UN Conventions on Civil and Political Rights as well as Economic and Social Rights were ratified.

And the report also offered recommendations aimed at politicians, technocrats, and citizens in order to combat the threats to democracy.

These incuded migration policies aimed at encouraging integration and political participation among migrants, while political parties were advised to ensure their party statutes and electoral platforms were inclusive, and to “engage in fact-based democratic dialogue on migration to promote tolerance towards migrants and counter inaccurate public beliefs, knowledge and behaviour about migration”.

Citizens also have a responsibility, the report writers said, and noted that citizen engagement was “critical to democracy's resilience”. The recommendations put forward by the report for members of civil society included calling for more transparency, engaging with political parties, and develop “an in-depth understanding of the political context and underlying power dynamics”.

With reporting by Eugênia Tanaka

IN-DEPTH: How Sweden's getting ready for the election-year information war