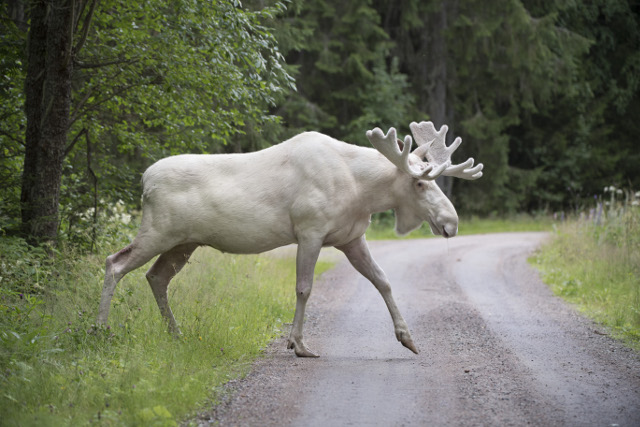 The elk went viral this August after it was caught on camera by a local councillor, Hans Nilsson, in the Värmland region in western Sweden. But as The Local reported this week, it was at risk of being killed as a last resort after police said it had charged at a woman who was out walking her dogs.

However, on Tuesday afternoon the decision to shoot the elk was revoked.

“Since November 6th there have been no reports about the elk acting in an aggressive way, which is why the decision about a protective hunt no longer applies,” said Värmland police in a statement.

Nilsson’s footage of the rare creature was shared thousands of times on social media in summer after being picked up by global media outlets including the BBC and National Geographic.

But the animal’s viral fame brought unintended consequences, with experts forced to warn sightseers to keep their distance after people flocked to the area to catch a glimpse of it.

“It's very sad when you have seen the problem for a long time,” local nature photographer Ingemar Petersson told The Local on Monday. “There is a lot of pressure on the area, and many photographers have behaved badly, but the elk is not aggressive.”

Tens of thousands rallied to save the elk. A total of 51,388 people signed a petition by Sweden's largest animal rights organization, Djurens rätt, in 24 hours – a new record for the organization.

“It is the fastest-growing petition we have ever had,” a spokesperson for the organization, which was founded in 1882 and has more than 40,000 members, told The Local earlier on Tuesday.

Another petition started by Nilsson himself on Monday had collected more than 10,000 signatures by Tuesday afternoon, calling for Swedish authorities to spare the elk's life.

“I could turn myself into a human shield for the elk, even though I can't make myself quite that big,” the Eda councillor vowed, speaking to Värmland regional newspaper VF.