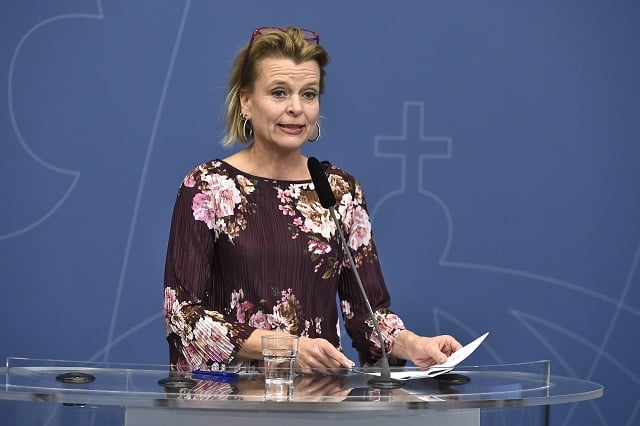 It's the latest in a series of campaigns launched to raise awareness of and tackle sexism in the worlds of music, law, sports, politics, theatre, and media in Sweden, a country frequently labelled one of the most gender-equal in the world.

The latest document is titled 'I maktens korridorer' (In the corridors of power) and has been published in Svenska Dagbladet, signed by 1,300 women in politics. The women who signed the document include Party Secretary of the governing Social Democrats Lena Rådström Baastad, former leader of the Liberals Maria Leissner, as well as MPs, former ministers, and women active at all levels of politics.

“I was 17 years old and was assaulted by a Stockholm politician who is now a top candidate in the 2018 election,” one woman wrote.

Other testimonies described assaults as well as sexist and degrading comments made by older, more powerful men in politics.

“Above all, it is you men who must take responsibility” to tackle the problem, the writers of the appeal wrote. They added that it was not too late for parties to withdraw “unsuitable candidates who have gone over the line” from next year's election campaign.

The appeal began as a Facebook group which gathered testimonies. It started out with around 200 members but now counts over 5,000.

In a debate article in Svenska Dagbladet on Sunday, Sweden's Minister for Gender Equality, Åsa Regnér, urged men in politics to support women in the fight against sexism and sexual harassment. Regnér, the only female minister who signed the 'I maktens korridorer' appeal, said the document showed “a serious democratic problem in Swedish politics”.

“I urge men in politics to step up and stand on the side of women. How do you contribute to the gender equality policy goal of evenly distributing power and influence in Sweden? Everybody can do something and work is starting now,”  she wrote.

Swedish Prime Minister Stefan Löfven had earlier said he was “disturbed” by the stories which have come to light.

“We knew that the problem existed, but I don't think anyone could imagine the scope,” he commented.

At a press conference held with French President Emmanuel Macron, who was in Sweden for an EU summit  last Friday, Löfven encouraged women to report assault and harassment to police, and also called for more “information and discussion in our schools, so boys learn what it means to be a man”.

Macron said that France had “exactly the same” issues in terms of reports of sexism, and called for open debate on the topic. He added: “But we must avoid taking over the work of judges and the judiciary.”

The global '#MeToo' campaign, started in response to rape and harassment allegations against Hollywood producer Harvey Weinstein, has had a huge impact in Sweden.

Hundreds of Swedish women, including well-known figures from the worlds of acting, comedy, journalism, and tech, have shared their stories under the #MeToo hashtag and called for more to be done to tackle harassment.

In recent weeks, this has led to organized efforts to gather testimonies and call for concrete change within specific industries in Sweden ranging from music to law.