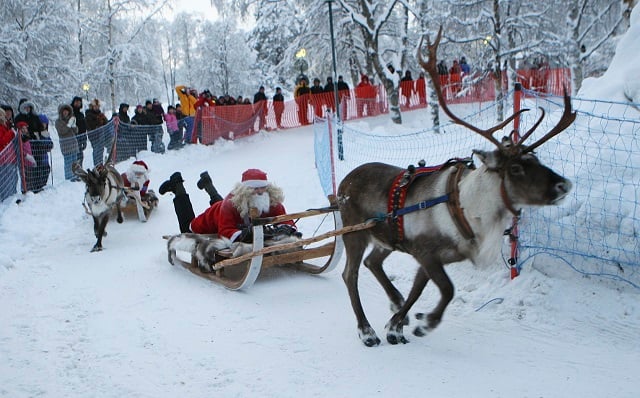 The Santa Winter Games have taken place every year in Gällivare, a small town 100km north of the Arctic Circle, since 2003. Kris Kringles from across the world battled to be crowned the best at skills including Christmas tree dressing, present wrapping, lasso-throwing and a dance-off.

Santas travelled from as far afield as Colombia, Hong Kong and China to compete, and last year a Swedish competitor won for the first time in the contest's 13-year history.

This year, however, the games have been cancelled due to urban development in Gällivare, where multiple construction projects are currently taking place, making it difficult to hold the event.

“We are actually moving a large part of the town due to mining underground,” a spokesperson from Visit Gällivare told The Local. “We're basically building a whole new town and moving lots of houses, so we don't have space to host the games here.”

But the town will still hold Christmas markets and a Winter Wonderland Weekend, where visitors will be able to visit 15 Santas in log cabins in the forest – some of whom will travel from Hong Kong and China to take part.

As for when the games will return, the spokesperson could not confirm if this would happen in time for next winter, but said the town authorities had been in touch with Santas from all over the world about organizing a new kind of event.

“We'll see what will happen! We've had lots of ideas from Santas across the world, and some of them asked to have competitions in their home countries and then a final in Gällivare with the winners from each country,” she said.

Santa Sivert Svensson told public broadcaster SVT that three Chinese Santas are expected to be there, after they contacted organizers to ask if they could come despite the Winter Games not taking place.

And there are other ways to get your festive fix across the country, including at the Stockholm Santa Run in the Swedish capital, for any locals or tourists who want to see Santa Clauses compete.

READ ALSO: 12 things you only get if you’ve celebrated Christmas in Sweden