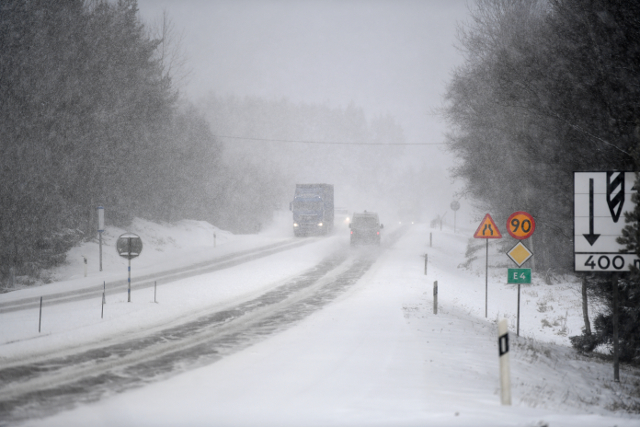 File photo of snow on the E4 earlier this year. Photo: Fredrik Sandberg/TT

In the capital Stockholm, much of the snow has melted and a milder end to the week is in store, but snow is continuing to fall heavily across Jämtland, Västernorrland, Västerbotten and Norrbotten after the precipitation area moved north.

In Jämtland, a Class 2 weather warning (the medium level on a three-point scale) was in place and icy roads were slowing down traffic in both Jämtland and Västernorrland, while several trees had fallen on the road.

Across inland areas of Västerbotten and Norrbotten, weather agency SMHI has issued a Class 1 warning, and 20 to 30 centimetres of snow is expected to fall during the day. In several places, snow ploughs were struggling to get on the roads.

Further Class 2 warnings for snowfall in combination with wind are in place in Jämtland, Västernorrland, Västerbotten and Norrbotten's coast. The wind is blowing at 24-25 metres per second along the north coast in many directions.

“This is where we expect it to be the most difficult during the day. Among other places, along the E4 that goes up the entire coast, it may be very difficult with snow and slush,” said SMHI meteorologist Angelica Lundberg.

Several bus routes in the Sundsvall area were cancelled on Thursday morning due to the difficult situation on the roads, Allehanda reported.

A further Class 2 warning was issued for the northern Lapland mountains due to strong winds and snow as well as poor visibility. According to SMHI, there appears to be a storm on the highest peaks of these mountains. The same storm is also battering parts of Norway, which has called it Storm Ylva.