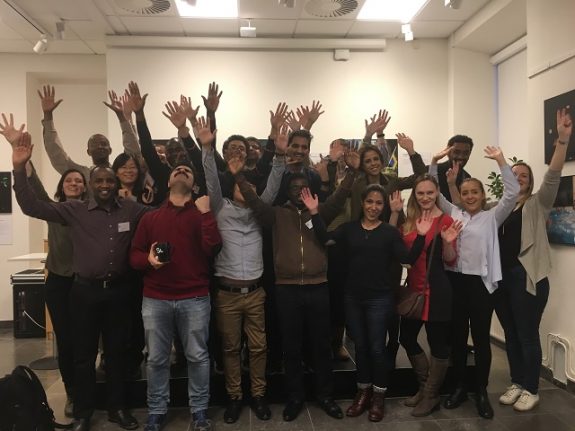 As SI News reported in the last newsletter, Smart Energy Challenge finalists gathered in Stockholm on November 16th and 17th for a two-day event organized by the Social Entrepreneurship Forum.

The finalists were offered professional training on how to pitch their ideas, and were able to participate in study visits and networking events, allowing them to meet experts in entrepreneurship and sustainability and build a valuable network.

By far the most valuable aspect of the event, according to participants who spoke with SI News, was learning how to make a short and powerful pitch.

“How to pitch my idea was something new to me and making a presentation of my idea in one minute to attract either the customer or the investors,” said Henry Nkweto, whose project aims to integrate an automatic curtain opening system with lighting. Jafar Salehi, whose project was entitled Sense The Nature’s Feeling, also mentioned the importance of learning how to communicate a lot quickly.

“The surprising part was how valuable one minute can be,” he said.

“At first I didn’t expect that I could summarize the main points in a one minute pitch, but after a few exercises I found you can send a strong message to your audience in one minute.”

Ekatherina Zhukova, whose project looked at minimizing waste created by international student mobility, emphasized how surprised she was to learn about the struggles facing social entrepreneurs in different markets.

“For example, the company that gave a presentation to us – Watty – works in the Swedish market and is able to make profit from its Swedish clients by offering them a service of controlling electricity use at home through an app,” she explained.

“Yet, another company that we visited – Solvatten – works with the most vulnerable groups of the populations in Africa by offering them purification of water. Making profit in this case remains challenging and the company therefore has to partner with bigger companies like H&M to receive funding.” And for Mahmoud Hanafy, who came up with the idea for the Mama App, one of the most important aspects of the Smart Energy Challenge finals was the networking.

“I am very happy to know those amazing alumni, it was one of great things to meet them and to be friends,” he said.

For Sai San Moon Lu, whose project involves transforming burned calories into electricity, having the chance to engage in one-to-one consultations left her inspired to continue developing her concept.

“The most valuable part was training under the tutor's help. We exchanged ideas with each other and gave some updated suggestions to each other,” she explained.

“l learnt that we really can start our own businesses through the pitch training, and I’m planning to push my idea into reality if possible.”

While it remains to be seen how the many projects presented by the finalists will evolve, one thing is clear: the event went a long way toward building and strengthening important networks within the NFGL community itself, and between the NFGL members and the wider sustainability community in Sweden

“The Swedish institute should keep on organizing such events that create a platform for scholars to develop ideas that will save the world and learn from other people,” added finalist Henry Nkweto.