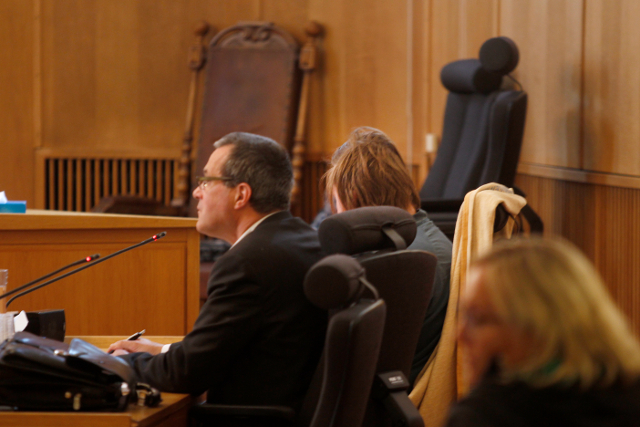 The accused and his legal counsel at a remand hearing earlier this year. Photo: Mats Andersson/TT

Tova Moberg, 19, left her home in the small town of Njutånger in Hudiksvall municipality, eastern Sweden, on a Saturday evening in May to go to a party. She was reported missing by her family when she did not return home the following day. A few days later her body was found hidden in a lake.

Her ex-boyfriend was shortly thereafter arrested on suspicion of killing her. He had previously been reported to the police for assaulting her, and she had recorded several violent incidents in her diary.

An investigation of the body showed that she had been strangled and hit 20 times with a hammer.

Forensic evidence to be used in the trial consists of a roll of tape which the prosecutor claims was used when the body was being lowered into the lake, as well as clothes said to belong to the suspect.

Moberg's diary is also to be used as evidence in the trial. In it, she described an abusive relationship where she was not allowed to see her friends, and feared that he would eventually kill her.

One entry describes an argument after he found out she had a secret account on Snapchat.

“I have never taken such a beating before. But there's nothing I can do. He says that if I break up with him he'll kill me, I dare not take that chance. I'm actually feeling really bad but I can't think about it. But I'm trying to make the best of the situation,” she wrote according to the investigation.

No weapons or tools that could potentially be tied to the murder have been found, and no DNA traces of the man on her body, reported the TT news agency ahead of the start of the trial on Monday.

The 22-year-old ex-boyfriend is also accused of 'gross violation of a woman's integrity' ('grov kvinnofridskränkning'). He denies both that and the murder charge.

The trial will be held at Hudiksvall District Court, scheduled to end on December 21st.