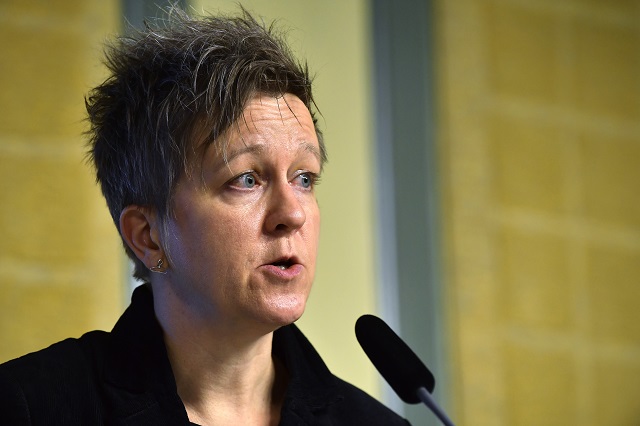 Ulrika Westerlund, who presented the report to the government. Photo: Alexander Larsson Vierth/TT

Earlier reports have shown that the living conditions for trans people in Sweden are worse than for the average person, and they are more likely to rate their health as poor or to take their own lives than cis people (those who identify with the gender they were assigned at birth).

The aim of the inquiry, which was ordered by the government back in October, was defined as to “investigate how trans people are affected by society's cis and hetero norms, identify the barriers in society to trans people's opportunities to live according to their gender identity and, where necessary, propose interventions to remedy any shortcomings”.

One of the suggestions was an investigation into a third legal gender in Sweden, as well as an overhaul of the personal number.

These numbers, which are the Swedish equivalent of a social security number and necessary for numerous essential tasks from registering with a doctor to signing up for a bank account, are linked to an individual's registered gender, which can lead to problems if this gender is changed.

“This can create huge difficulties, perhaps especially if you're young and don't have so many resources, for example of you suddenly don't have a phone contract or high-cost protection [the ceiling that prevents anyone registered in Sweden from paying over 1100 kronor each year on healthcare],” Ulrika Westerlund, who led the inquiry, told the TT newswire.

Another of the proposals was to investigate the possibility of including a gender-neutral option on Swedish passports to make it easier for transgender people to travel.

READ ALSO: 'I'd love to be a transgender dancing queen here in Sweden'

The report also called for state funding to support projects aimed at developing trans-inclusive environments, and for the National Board of Housing, Building and Planning to create guidelines on gender-neutral changing rooms and toilets.

Many of the changes suggested by the inquiry related to structural overhauls, such as a government action plan for equal rights and opportunities for LGBTQI people and training of police officers in LGBTQI issues, while the new Gender Equality agency was given responsibility for coordinating and supporting these changes.

The full text of the report, titled 'Trans people in Sweden, suggestions for strengthened status and better living conditions', is available on the Swedish government's website.

Until as recently as 2013, transgender people had to accept sterilization before getting official recognition for their sex changes. Now, those who underwent forced sterilization could receive compensation from the government.

And it was only earlier this year that the National Board of Health and Welfare stopped automatically classifying transgender people as mentally ill. They took this decision after the World Health Organization removed the transsexualism classification from the chapter on mental illness in its diagnostic guide.