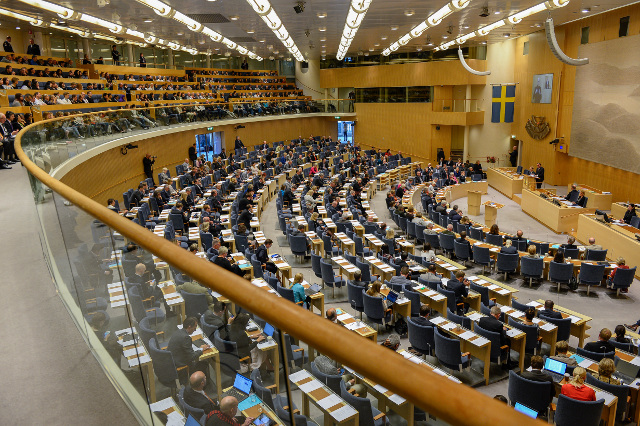 Dagens Nyheter (DN) reports that around 20 members of the Green Party – the junior partner in Sweden’s centre-left coalition government – told the newspaper that the MP regularly approaches “above all young women” in the party with “sexual innuendo and unwelcome advances”.

Several women said they had told senior party officials about the man’s behaviour, with accusations dating back ten years, and one filed a police report in 2015 which was later dropped without charge.

The MP has now taken a break from political duties while the party investigates the accusations.

He told Aftonbladet on Monday that he had filed a police report against one party colleague, after she accused him in DN’s article of sticking his tongue into her five-month-old baby’s mouth.

“It never happened. We were having lunch at a restaurant with a lot of people in the room. A year and a half later she got in touch with the party [to report the alleged incident]. My group leader invited us to a meeting with her and me, which she however said no to,” the MP told Aftonbladet.

“I have reported this person to the police for gross defamation and my legal counsel is working on the case,” he added and declined to comment on other allegations about inappropriate behaviour.

“The others are rumours which I don’t want to comment,” he told Aftonbladet.

Green Party co-leader and education minister Gustav Fridolin told the tabloid he was informed of the accusations last week. He said: “I know the parliamentary group leader has spoken to him about that there is an ongoing investigation. The investigation will show how the party is going to act.”

On Tuesday a Green Party spokesperson said they had asked him to quit his political duties for the party. Later in the day the MP told DN he was leaving the party but would continue to work as an independent MP in parliament until the next election, September 2018, after which he would not stand for election again.

READ ALSO: What does the #MeToo campaign reveal about Swedish feminism

Earlier this month more than 1,300 women working in Swedish politics signed a document alleging sexism and harassment connected to their work, accusing unnamed members of parties on both sides of the political divide. It was the latest in a series of campaigns calling out sexism in the worlds of for example, music, law, sports, theatre and media in Sweden.

Social Democrat Stockholm councillor Roger Mogert stepped down last week after he was accused of having used his position of power to make advances on women. “I have behaved in a way that is unacceptable, I have made these women feel vulnerable. I am deeply sorry and would like to apologize to these people,” he said in a statement, published by DN.

The global #MeToo campaign, started in response to rape and harassment allegations against Hollywood producer Harvey Weinstein, has had a huge impact in Sweden.

Thousands of Swedish women, including well-known figures from the worlds of acting, comedy, journalism, and tech, have shared their stories under the #MeToo hashtag and called for more to be done to tackle harassment.