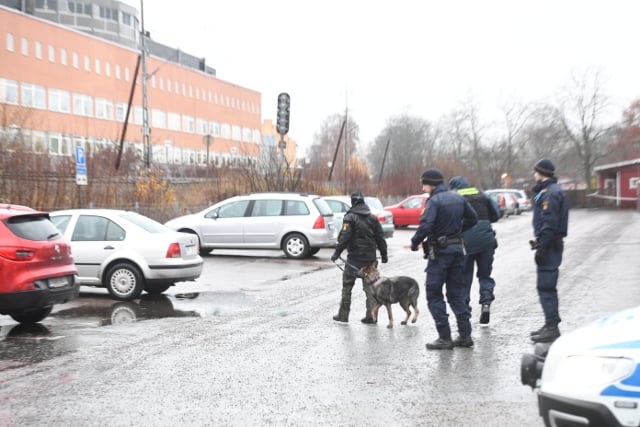 Unnamed police sources told the TT newswire that the blast was caused by a hand grenade that went off in a car park around 50 metres from the station but on the other side of the railway running through the town. The sources said that police officers had been nearby at the time.

Police spokespeople did not immediately confirm, but after bomb technicians had concluded their investigation they issued an update saying there was “a lot that suggests a hand grenade detonated”.

TT reported that the item was thrown at police officers at the scene, but bounced off a pole or wire above the railway and therefore did not land closer to the officers.

The suspect, a 20-year-old man, was arrested after bomb technicians worked at the scene through the night while police were in a 'state of readiness'. According to Sannervik, the state of readiness means that police have created a special organization for investigative and security measures related to the incident.

“It's partly due to the magnitude, partly because we need to bring in staff from other regions and units,” she explained.

“There were lots of people around, both residents and police officers; it was pure chance that no one was injured,” Carin Götblad, the local head of police, told media at a press conference on Tuesday, which addressed police work to tackle organized crime.

“There's a lot that suggests yesterday evening's explosion was directed at police,” she added.

Police said they believe it was a revenge attack following a police operation in the Gottsunda/Valsätra area of Uppsala in recent days. However, they said they are investigating a number of theories.

The blast took place at around 11pm on Monday, causing damage to eight cars. However, none of the damaged cars were police vehicles.

No one was injured, but police are treating the incident as devastation endangering the public and attempted murder.

In October, the Swedish government promised to increase protection for police following a series of apparently targeted attacks.

The announcement came days after man was arrested for attempted murder in Västerås after firing at least 12 shots at a police officer's home, and on the same night a police station in Växjö, southern Sweden was attacked with fireworks and cobblestones.

Several of the violent attacks are thought to be linked to local gangs.