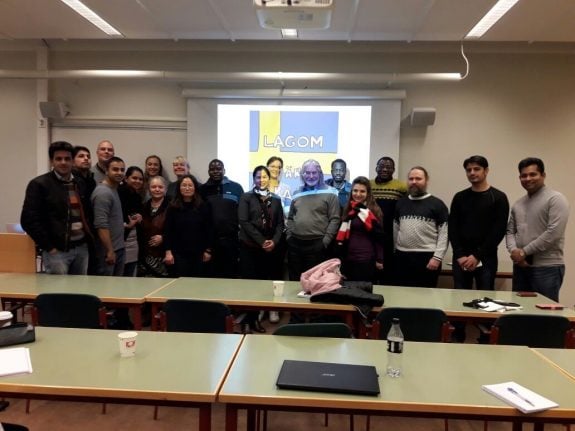 On Tuesday November 28th, the NFGL Local Network in Gävle had its first event since it was created in September 2017.

The event consisted of a workshop and lecture about cross-cultural leadership, held by the well-known speaker John Alexander (who also spoke at the NFGL Kick Off in Stockholm) in collaboration with professors from the Economics Faculty of University of Gävle.

It marked the first time an event supported by the Swedish Institute took place in the University of Gävle. Everyone who attended was very happy and motivated to have such a well-known speaker give a talk during a normal day of classes.

Around 22 people attended the event, most of them MBA students who represented several different countries including Zambia, Liberia, Bangladesh, Finland, Russia, Sweden, and Colombia.

Dr. Alexander addressed topics such as differences among cultures including language, time orientation (punctuality) and communication.

However, as most of the attendees had professional leadership roles or had started their own business projects, Dr. Alexander also engaged in a deeper analysis about leadership – a skill every MBA student wants to further develop. So what did we learn about cross-cultural leadership?

Cross-cultural leadership is the process by which an individual coordinates and motivates people from different countries to work in team in order to accomplish the group’s goals.

This process is reciprocal where the leader and team members learn to increase the power of their strengths and improve upon their weaknesses by creating strong interpersonal relationships.

Do women and men lead in the same way?

Even though all leaders share some common traits and characteristics, there are some basic differences between female and male leadership.

According to Abele (2003) women tend to be more communal. In other words, they are more collaborative, aware of other’s feelings and skillful at building close relationships with team members.

Meanwhile, men tend to be act more as agents as they are more task-oriented, competitive, and seek to exert influence on the team.

What are the most important characteristics of a leader?

There is no secret recipe for becoming a leader. However, most leaders share some common traits and competences, according to Dr. Alexander. For example:

Approachability: A good leader is always available to help team members when they are in need.

Focus on team: Rather than fulfilling personal goals, a good leader sets the team’s goals as the main priority. He/she also supports the personal and professional development of the team members.

Listening skills: Good leaders are able to really understand what others want to say. It is not only about hearing words but deciphering the hidden message behind the feelings and emotions of team members.

Effective communication: Leaders are good at communicating the right message spontaneously, not only with team members, but also when speaking in public.

Solving problems: Relying on practical experience, knowledge, or creativity, a leader should be able to deal with small and big problems, especially those that team members cannot solve by themselves.

Self-motivation: When the team’s mood is down, a good leader can cheer team members up and keep them on track. But who motivates the leader? The ability to stay self-motivated is one of the most important characteristics that all leaders share. It helps them remain optimistic and “do the impossible”. How can you develop leadership skills while studying in Sweden?

Gaining or improving leadership skills is a plus that will stand out your personal and professional background once you finish your studies. Here is a list some activities (based on personal experience) you can do in order to start on your path toward becoming a better future global leader.

1. Create or join the board of a Local Network.

2. Organize academic events with the support of your faculty

3. Attend the events and study visits arranged by the Swedish Institute.

4. Join your local student union and show interest in becoming part of the board.

5. Go beyond expectations! Start your own internet-based business project with friends in Sweden or from your home country.

We at the Local Network in Gävle really hope these insights and tips on leadership encourage you to become better leaders and take advantage of leadership opportunities while staying in Sweden.

One final question: Do you think leaders are born or made?

Email your answers to [email protected].

Written by the NFGL Local Network in Gävle