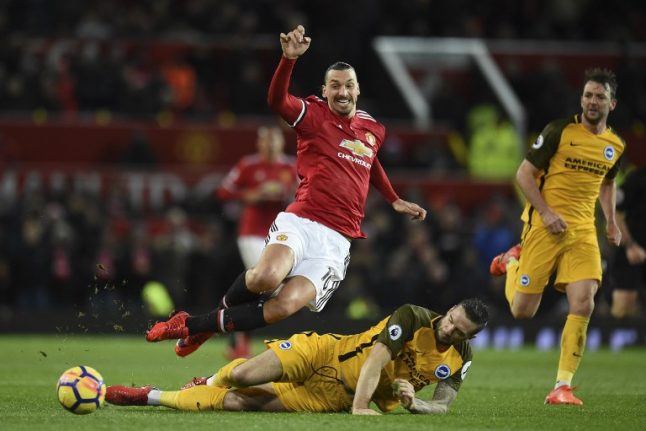 Zlatan Ibrahimovic, seen here playing for Manchester United against Brighton Irish last week, will turn his life story into a movie. Photo: OLI SCARFF/AFP
Swedish author David Lagercrantz confirmed that the footballer’s ‘I am Zlatan’ autobiography will be brought to the big screen.
“I can confirm that we are working on a script and I think it can be really good,” Lagercrantz told Aftonbladet.
According to Aftonbladet, the script is scheduled to be completed by March 2018 and then the film will move in to the casting phase. Sources that spoke with the newspaper said that Ibrahimovic would fund the project himself.
Fredrik Heinig of production company B-Reel Films confirmed to Aftonbladet that his company “worked on a manuscript based on David and Zlatan’s fantastic book” but declined to say more.
Lagercrantz was the ghostwriter of ‘I am Zlatan’ and has also written two sequels to Stieg Larsson's Millennium series.
Published in 2011, the Ibrahimovic autobiography is one of the all-time Swedish bestsellers with well over 800,000 copies sold domestically. It has since been translated into dozens of languages and has sold millions of copies all over the world.
In 2015, Lagercrantz revealed that none of the quotes in the book – which include beauties such as “an injured Zlatan is a serious thing for any team” and “I was unhappy, but I carried on being brilliant” – came from Ibrahimovic himself, prompting accusations that the book was fake. The author vehemently rejected that notion and said that Ibrahimovic approved every quote and was heavily involved in the writing process.
The sporting memoirs follow the football player's life from his tough youth in one of Malmö's poorest areas, Rosengård, to his rise to fame through his professional football career, including years spent at Ajax, Juventus, Inter and AC Milan as well as among Spanish giants Barcelona.
The 36-year-old recently signed a one-year deal to return to Manchester United.
If ‘I am Zlatan’ does indeed get turned into a film, it will follow in the footsteps of 'Den unge Zlatan' (English title: 'Becoming Zlatan’), a documentary that hit Swedish theaters in 2016.
The brash footballer has previously said that his life story would contain enough material for a ten-part saga that he likened to the 80s action movies about Rambo, played by Sylvester Stallone.
“There are talks in progress. We can make a lot of films about me. It would be like Rambo I to Rambo V – we could do Ibracadabra 1 to 10,” he told Swedish business newspaper Dagens Industri last year.