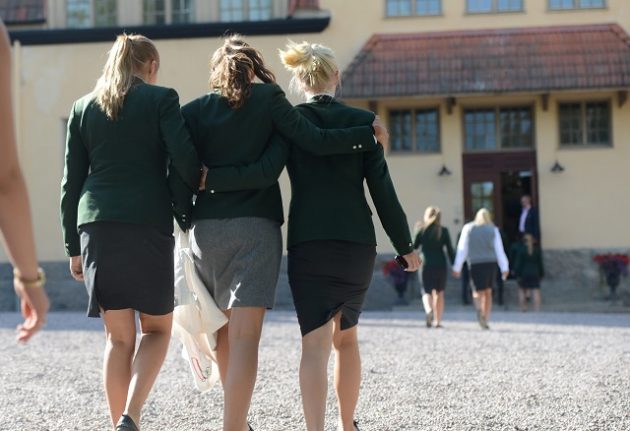 File photo of students in school uniform; not the school or the uniform referred to in the article. Photo: Fredrik Sandberg / SCANPIX

In the decision published on Monday, the Schools Inspectorate said that the Nordic International School in Norrköping “is not following constitutional requirements regarding the contents of its rules” and that students' clothes “should be seen as an individual expression and determined by the students themselves”.

It went on to say that school rules should only include clothing regulations in exceptional circumstances, for example if they were necessary “for reasons of order and security”.

The Inspectorate emphasized “that it is not usually against regulations to provide students with uniform clothing free of charge. (…) The failure in the case in question is that there is a school rule about uniform clothing and that the school applies disciplinary action if a student violates the clothing code”.

According to information on the Nordic International School's website, uniforms are provided to students for free, and help to “strengthen the international atmosphere of our schools, create a fellowship culture among the students, build a high ambition-focused culture at school”.

Students at the school sign a contract with the headteacher before they enrol, which includes agreeing to school rules including the uniform policy. If they are found to break any of these rules, they could face disciplinary action including warnings and being put in isolation.

However, in a written statement provided to the Schools Inspectorate, the headteacher said this had not yet happened in practice and that no parents or students had complained about the policy.

The agency decided to carry out a review at the school in September, after receiving one report relating to its uniform policy. The controversy was also reported by Swedish media, including the Expressen tabloid and public broadcaster SVT.

It was the first time that the agency has carried out an inspection of a school relating to a uniform policy, and it has ordered the school to take action to change its rules around uniform.