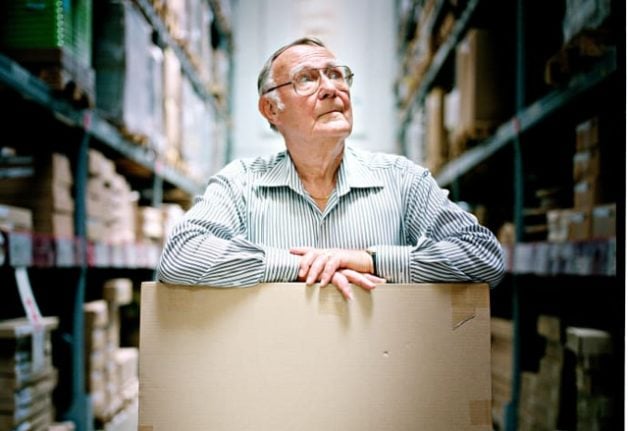 The Norden Association (Föreningen Norden) hailed the global furniture giant with its annual language prize for contributing to promoting the Nordic languages and culture around the world.

“Scandinavian specialities are served in the restaurants of all Ikea stores, customers are met by signs spelling out ‘Tack' and ‘Hej då' and the furniture names are not translated. Those of us in the Nordics also learn that it's called lingon, godis and glass, sovdags, tupplur and gäspa in Swedish,” said the jury.

For those of our readers who do not speak Swedish, godis and glass mean candy and ice cream, sovdags means it's time to sleep, tupplur is what you call a nap and gäspa means to yawn.

Ikea's items all have Scandinavian-sounding names, often many non-Swedes' first point-of-contact with the Swedish language. Textiles tend to get girls' names; armchairs and dining tables are named after Swedish towns, and bookcases get boys' names or names based on various professions.

Ingvar Kamprad, who founded Ikea in his home in the rural Småland region in 1943, said he was “very grateful” for the award. The word Ikea is an acronym for Ingvar Kamprad Elmtaryd Agunnaryd, the later two words referring to the farm on which Kamprad was raised and the name of his hometown in Sweden.

“At Ikea, we always place great emphasis on promoting what's unique about Scandinavian culture and our Scandinavian values. This is the core of our strategy and part of what makes Ikea what it is today – a successful global furniture and home furnishing company. And since I've been struggling with dyslexia all my life, I understand how important languages are, perhaps better than most,” said the 91-year-old businessman, who is today one of the richest business people in the world, in a statement.

The prize was handed out in Oslo on Monday. Last year it was awarded to popular Norwegian series 'Skam' for its ability to engage a young audience and make the Norwegian language cool.