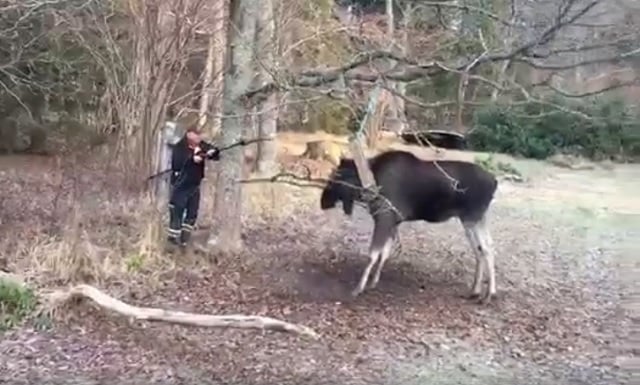 But that’s the situation that faced 73-year-old Swede Leif Gisslén when he was out for his morning walk on Wednesday, so he decided to help the trapped elk.

When he first spotted the agitated animal, which was running around trying to free itself, Gisslén wasn’t sure what had happened, until he moved closer and saw that it had got tangled in a swing which was attached to a tree on Vindö, an island in the Stockholm archipelago.

“It felt sad to see an animal stuck and not able to free itself,” Gisslén told The Local. “A desperate animal which can't get away is appalling. I saw that it couldn't free itself, despite the fact it was darting around to try to break the rope. Then I realized I was the only one who could help the elk before it hurt itself.”

In the video below, Gisslén reassures the elk, telling it: “I'll come and help you right away.” However, he had to approach with caution to avoid frightening the animal, which he estimated weighed over 200 kilos.

He borrowed a saw from a neighbour and approached the animal slowly, continuing to talk to it. Eventually, the elk appeared to calm down and stood still while Gisslén cut through the rope.

Eventually, the elk was freed, at which point it darted straight at the 73-year-old before running away into the woodland.

The video of the rescue has been watched hundreds of thousands of times and shared via social media.

“The response has been overwhelming and made me really happy and proud that I dared to go forward and save the elk,”Gisslén said.

He also hopes his adventure will make people more aware of how dangerous swings can be to Sweden's wildlife, 'and maybe it will mean that more summer house owners take their swings in at autumn”.

There are hundreds of thousands of elk living in Sweden, and they can be dangerous to humans: each year, several thousand road accidents are caused by the animals, and Swedish cars often undergo so-called 'elk tests' to check how well they can cope with a large obstacle that suddenly appears.

This causes problems when they stray into residential areas, or charge at joggers who they might view as threatening. In summer 2014, a group of children had to flee their classroom after an elk broke in, and one month after that incident a different elk wandered into a family home.

Attacks are rare but do happen: earlier this year, an elderly Swede used his walking stick to fend off an elk, just a few months after a man in northern Sweden had to seek hospital care for a suspected broken arm after an attack.

But sometimes it's the elk themselves who run into trouble and require a helping hand. Baby elks in particular can get into tricky situations, and in February this year, a video of a group of Swedish skaters rescuing an elk which had fallen through a frozen-over lake became a viral hit.