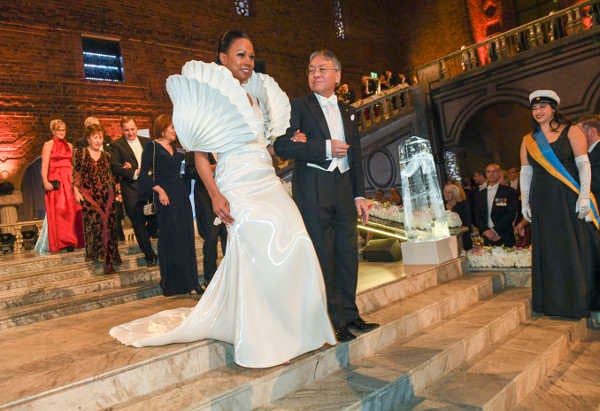 Taking place at Stockholm City Hall on Sunday, December 10th, the banquet was a typically glamorous affair and featured performances by musicians playing instruments made entirely of ice.

As usual, many of the speeches had a political slant: Michael Rosbash, one of the 2017 Medicine Prize winners, spoke of the importance of immigration to the development of societies, while Literature Prize winner Kazuo Ishiguro talked about how the Nobel Prize can bring people together.

The person everyone in Sweden was talking about wasn't a prize-winner however, but rather Culture Minister Alice Bah-Kuhnke, who wore the most spectacular dress of the evening.

Her outfit came with a political message too: the dress, made entirely of paper, is designed to symbolize and highlight melting glaciers and ice caps.

“I wanted to take the opportunity to highlight issues that are crucial – the Arctic and climate change,” the Green Party politician explained to tabloid Aftonbladet.

Highlights of the banquet can be found in the image gallery below.

IN PICTURES: The best of Sweden's 2017 Nobel Prize banquet