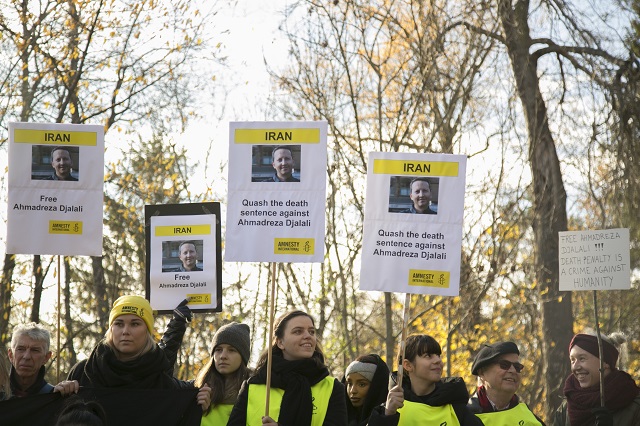 Lawyers for Ahmadreza Djalali, an emergency medicine specialist resident in Sweden, were informed Saturday that the Supreme Court had upheld his sentence “without granting them an opportunity to file their defence submissions,” Amnesty said in a statement.

Djalali was a visiting professor at Belgium's Vrije University when he was arrested during a trip to Iran in April 2016.

He was accused of passing information to Israel's Mossad intelligence service during the negotiations that led to Iran's nuclear deal with world powers in 2015. Djalali has claimed he is being punished for refusing to spy for Iran while working in Europe.

“This is not only a shocking assault on the right to a fair trial but is also in utter disregard for Ahmadreza Djalali's right to life,” said Magdalena Mughrabi, Amnesty's internal deputy director for the Middle East and North Africa.

She called on the Iranian authorities to immediately quash the sentence and grant him a “meaningful appeal”.

Djalali's lawyers repeatedly contacted the Supreme Court in order to present their submissions over the past month, but were stonewalled, Amnesty said.

“One of the actions of the convict was revealing the location of and some information on 30 outstanding individuals engaged in military and nuclear research projects,” Tehran's prosecutor general Abbas Jafari Dolatabadi said when the sentence was first announced in October.

Jafari Dolatabadi said the information led to the assassination of two Iranian nuclear scientists, Majid Shahriari and Masoud Alimohammadi, killed in bomb blasts in 2010 at the height of tensions over the country's atomic programme.

Djalali's lawyers said the evidence in his initial trial was gathered under duress and produced no evidence to substantiate the allegations.

Between 2010 and 2012, five Iranian scientists — four of them involved in the country's nuclear programme — were murdered in bomb and gun attacks in Tehran.

The Islamic republic accused the US and Israel of killing its scientists, including Shahriari, a key member of Iran's Atomic Energy Organization and Mostafa Ahmadi Roshan, a deputy director of the Natanz nuclear enrichment facility.

In 2012, Iran executed Majid Jamali Fashi, convicted for working for Mossad and assassinating Alimohammadi. Three others, including nuclear scientist Shahram Amiri, have since been hanged for workig for Israel and the US.