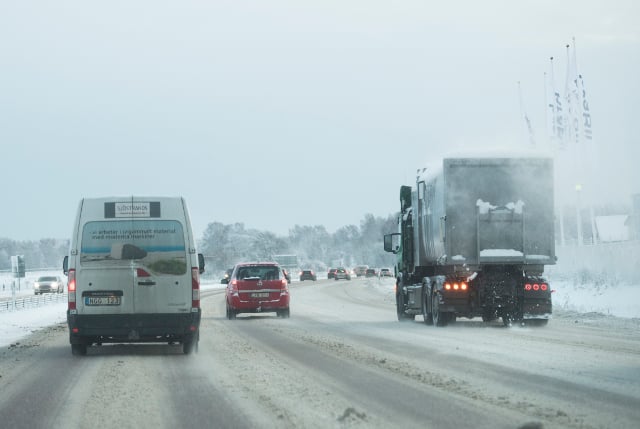 “There have been a lot of accidents during the night and several this morning, both in Jönköping and Östergötland counties. In Linköping it’s still snowing and it’s very slippery,” police spokesperson Björn Öberg said.

Accidents have included both collisions and cars driving off the road, but so far serious injuries have been avoided. In Mjölby for example a truck drove into several cars that had pulled over while their drivers had stopped to see to a fellow driver who had driven a car into a ditch.

“Fortunately its seems no one was seriously injured,” Öberg noted.

National weather agency SMHI has put a class one weather warning (the least serious on a scale from one to three) for snow in place across large stretches of the south of Sweden, with up to 10 centimetres predicted to fall over Tuesday afternoon.

Warnings are in place for Uppsala, Stockholm, Sörmland, Östergötland, Kronoberg, Kalmar, Skåne and Jönköping counties, as well as a section of Västergötland county.

“When the snowfall moves away colder air will come in, and there has also been periodic rain, so there could be a risk of ice from late in the afternoon,” Staerk noted.

Police advise drivers to be cautious.

“Be careful, keep your distance, and adjust your speed according to the state of the road. Just because (the limit) is 70, doesn’t mean you have to drive at 70,” Öberg warned.