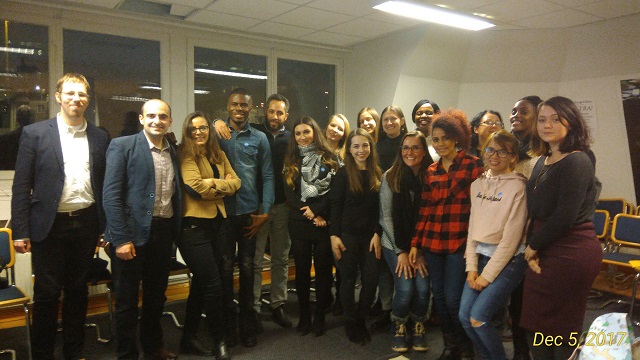 My study visit was quite an insightful experience that gave me an even more interesting perspective with regards to Swedish society and traditions.

As a group of SI scholarship holders, we had an opportunity to visit the Riksdag, or Sweden’s House of Parliament, on the island of Helgeandsholmen in Stockholm.

During the visit, we had a tour of the building and went through several rooms until we got to the Main Chamber.

Many things caught my eye during the tour but a few stuck with me. Firstly, Sweden is among the top countries when it comes to women representation in parliament with a whopping 44 percent!

This is proof of how the country strives to achieve gender balance in all sectors. Also, the building dates to 1905, and although it had to be renovated in the 1980s, most of the original parts are standing and they have managed to maintain the walls of the original building.

Something my country could use is the fact that members from outside of Stockholm have housing in apartments at the top of the parliament building and can stay there during the working days and can always go back to their home towns on weekends.

The housing facility on the roof of the building makes so much sense to me as it saves a huge amount of money instead of having to book them in hotels; instead of haemorrhaging funds this saves a great deal. Housing on the roof of the Riksdag building. Photo: Provinah Robert

The buildings also have underground tunnels which allow employees to move between them without going outside. In this cold weather, I am sold on the idea!

Also, in the Main Chamber, which is the heart of the Riksdag, there is a public gallery which is open to the general public and media representatives, thus one can be present during a session although not able to contribute. As for the representatives, they sit according to their respective constituencies and not party affiliation. We also had the privilege to see the 2018 budget – or at least take a picture of it. I found the grand stairway appealing in the East wing, with its marvelous marble and shades of green. It is also used for various ceremonial occasions. Sweden has eight political parties with the Social Democrats at the top and the number of seats a party has in the Riksdag is proportional to votes won in the election.

After the tour, we had a chance to enjoy lunch as a group courtesy of SI and headed to Kvinna till Kvinna.

This for me was a major highlight of the day as it showed me how much effort is being made to ensure equality in our present-day society and how many states are warming up to the idea of involving women in the civil society as well as state actors.

Through a presentation by Anna-Carin Hall, I was able to see the initiatives internationally that the organisation has been involved in through different organisations to ensure human rights are recognised and protected.

We saw an 8-minute video on the situation in Liberia and Congo and how women in those states have taken positive steps to ensure their security after having been subject to abuse and how this has had a positive impact on the conditions in such states.

We also had a quick overview on how the UN Security Council decided to adopt Resolution 1325 in 2000 which deals with women security and to ensure participation and protection of women’s rights.

We were also put in groups and made to bring out the reasons why it is important to involve women in state affairs or ensure their participation, protection, as well as a prevention of a relapse in discrimination based on gender.

I also learned that Kvinna till Kvinna is supported and works hand in hand with organisations such as Committee on the Elimination of Discrimination against Women (CEDAW).

On this note however, I would like to applaud my country for actively involving women in politics and recently there has been a rise in the number of women who are a part of decision-making bodies.

Also, several initiatives are in place to ensure women empowerment and security.

And lastly – my partner and I won goodie bags in the Bingo game at Kvinna till Kvinna! Provinah Robert studies at Uppsala University and is originally from Zimbabwe.