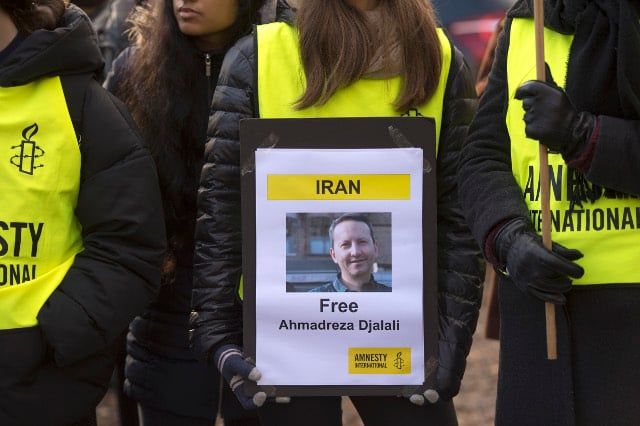 A demonstration in Lidingö asking for Ahmadreza Djalali to be freed. Photo: Hossein Salmanzadeh/TT

In the video aired late Sunday and prepared by Iran's intelligence ministry, Ahmadreza Djalali says he worked with a foreign intelligence agency while studying in Europe.

Djalali, an Iranian emergency medicine specialist resident in Sweden, was sentenced to death in the Islamic republic in October for spying for Israel.

The academic was a visiting professor at Belgium's Vrije Universiteit Brussel when he was arrested during a trip to Iran in April 2016.

He was accused of passing information to Israel's Mossad intelligence service during the negotiations that led to Iran's nuclear deal with world powers in 2015.

Djalali has claimed he is being punished for refusing to spy for Iran while working in Europe.

In the 17-minute video, a narrator speaks over images of a purported “interview” with Djalali crosscut with archive footage, accusing him of being a “traitor” and of having been recruited by Mossad.

The two were among five Iranian scientists — four of them involved in the country's nuclear programme — killed in bomb and gun attacks in Tehran between 2010 and 2012.

Iran has accused Mossad and the CIA of ordering the killings.

“We have raised the issue with the Iranian authorities on a regular basis,” Catherine Ray said, adding that the European Union would continue to do so.

“We are completely opposed to the death penalty in any circumstance,” she said.

After more than a decade of tensions with the West, Tehran in July 2015 signed a landmark deal with world powers to curb its nuclear activity in exchange for the gradual lifting of crippling economic sanctions.

US President Donald Trump has threatened to scrap the accord.