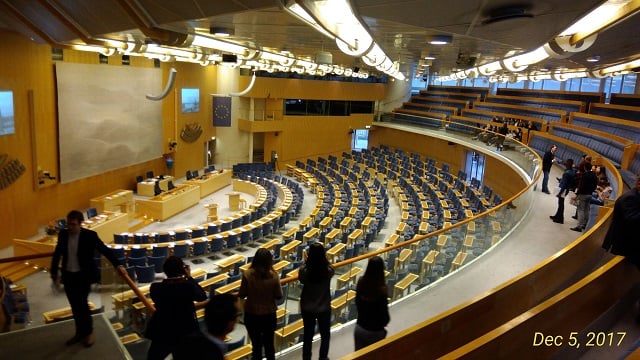 The morning started with SI scholars getting to know each other in person while we were waiting to pass through security into the Riksdag (the Swedish Parliament).

After this we were introduced to a guide at the main hall, where we got our first intonations about the building.

With a quick look you can understand that the building is a combination between old and amazing architecture and modern facilities infrastructure.

The Riksdag is actually composed of seven buildings, some of these buildings are connected by undergrounds tunnels.

Walking inside the Riksdag you notice several mural paintings, each of them telling you a moment from Swedish history; and a light green color is present in almost each corner.

Something that may be different from other parliament buildings in world is that Riksdag also has rooms for MPs to live in just beneath the roof. It should also be noted that the building Riksdag 3 used to a Bank.

During our one hour tour we got the chance to get more information on the decision-making process in Sweden’s representative democracy.

This discussion generated a great deal of discussion about democracy in Sweden through which we also understood that gender balance seems to no longer by an issue in Swedish politics since seats in parliament are divided almost 50-50 between women and men.

After the tour, we got the chance to walk through Gamla Stan and have lunch. After lunch and we continued with discussions where we tried to share as much as we could with each other about our different, colorful countries and cultures.

These words can be understood differently from different cultural backgrounds, but it looks like modern society in each country has similar issues concerning respecting human rights, especially women’s rights.

Kvinna till Kvinna supports more than 100 women’s organisations in five regions affected by conflict: Central and Western Africa, the Middle East, the South Caucasus and the Western Balkans.

During the workshop we were also presented with successful cases where women had played an important role in peace in countries where civil conflicts where very dangerous and destructive, such as Liberia.

The best part of the workshop was a game where we had to choose words related to peace, and how we can relate to peace. The result for me was that peace is related to us differently relative to the issues our home countries may be dealing with. The day ended with a fika and promises to each other to meet again in Stockholm.

Gilda Hoxha is studying at Södertörn University College. She is originally from Albania.