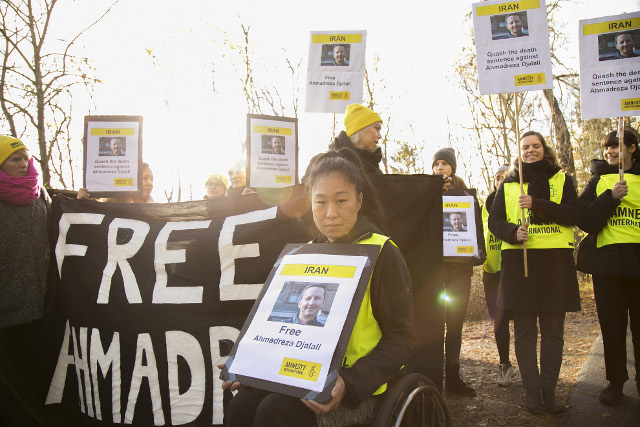 A protest against the decision in Stockholm. Photo: Hossein Salmanzadeh/TT

Ahmadreza Djalali, an Iranian emergency medicine specialist resident in Sweden, was sentenced to death in the Islamic republic in October for spying for Israel.

The academic was a visiting professor at Belgium's Vrije Universiteit Brussel when he was arrested during a trip to Iran in April 2016.

He was accused of passing information to Israel's Mossad intelligence service during the negotiations that led to Iran's nuclear deal with world powers in 2015.

Djalali has said he is being punished for refusing to spy for Iran while working in Europe.

In a statement, the four independent experts working with the United Nations warned that “the procedure against him was marred by numerous reports of due process and fair trial violations”.

The UN expert on the human rights situation in Iran, alongside the experts on arbitrary detention, torture and summary executions, pointed to reports that Djalali had been held incommunicado, denied access to a lawyer, and forced to confess.

“The execution of Dr Djalali must be immediately halted and he must be released and accorded an enforceable right to compensation and other reparations,” the experts said.

“No formal charges were brought against him for nearly 10 months and he was effectively prevented from exercising his right to challenge the legality of detention,” they said.

They also maintained that “Djalali's rights to a fair trial before an independent and impartial tribunal and to an effective defence have been violated”.