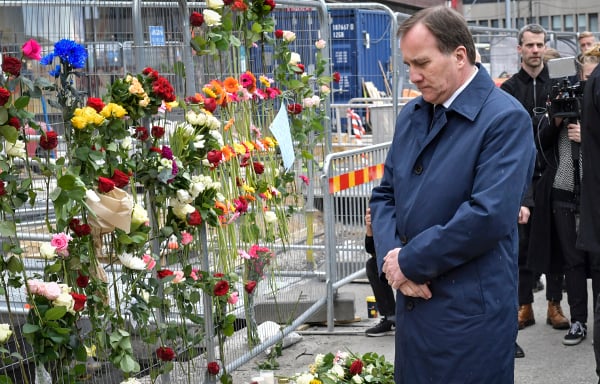 Swedish PM Stefan Löfven at the site of the attack in April 2017. Photo: Jonas Ekströmer/TT

Uzbek national Rakhmat Akilov confessed to hijacking and driving a truck down Drottninggatan on April 7th, killing five people and injuring several more. It has been a tough year, Löfven told Expressen TV.

“I think of the sad day on April 7th. When a lunatic drove over people on Drottninggatan in Stockholm. That's one of those days everyone remembers.”

The Swedish leader said it was the hardest day he has had on the job:

“It was. But above all I think of the victims of course. Of those who lost their lives, and those who were injured badly – and their relatives. It was very, very heavy”.

Looking forward to 2018 and asked whether he thought he would be elected again, Löfven said that is “up to the constituents” but that he very much wants to serve another four years and is pleased with the direction and achievements of his government. Regardless of how the election goes, he promised to handle the results “in a good way”.

READ ALSO: The Local's guide to Sweden's party leaders and the 2018 election