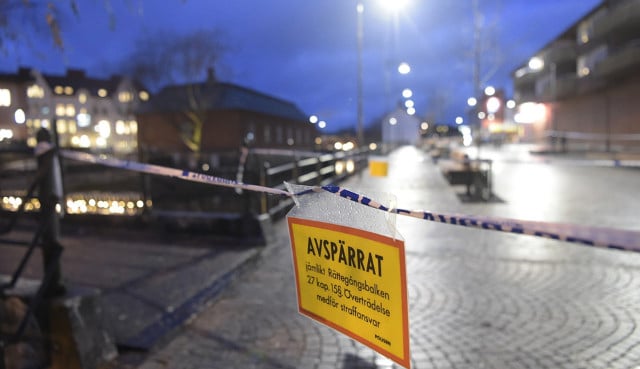 The figures, released on December 20th, show that there were 306 shooting incidents across the country this year.

Police define a shooting as an incident where a weapon is fired and there are traces of it in the form of bullets, shells, damage to materials or people, or alternatively that there is more than one independent eye witness.

The shooting must also be in breach of the law (so hunting for example does not impact the figures) and clearly not unintentional.

In the 306 confirmed shooting incidents during 2017 there were 41 deaths and 135 instances of injury. July had by far the highest number of injuries from shootings – 25 compared to the next highest which was 16 in both September and October.

Stockholm and southern Sweden were the regions with the most confirmed shootings (110 in the capital, 92 in the south) while northern Sweden had the fewest (five).

“A large proportion of the shootings are judged to be linked to conflicts between criminals. Conflicts often revolve around drug deals, (gang) rivalry and revenge (attacks). Victims of crime as well as perpetrators are often young, perhaps born in the 1990s, and difficult to motivate with social efforts,” the Swedish Police explain.

As The Local has previously reported, official figures have shown that deadly violence has decreased in Sweden compared to the 1990s, but the number of gun deaths appears to be on the rise.

Police efforts to combat the problem focus on identifying then nullifying key players in criminal networks, as well as reducing the number of guns on the streets. The work also has an international side, as weapons are being brought into Sweden illegally from abroad.

“We're working to reduce the presence of illegal weapons. Swedish police are working strategically and operatively with countries in the western Balkan region and other parts of Europe to detect and counteract the networks and individuals who smuggle weapons,” Linda Staaf, head of the intelligence unit at the Swedish Police National Operations Department (NOA) explained.

Sweden's police have been struggling with stretched resources in recent years, complaining they do not have the numbers carry out as many effective investigations as they would like.

In November, the former head of operations in a municipality with several areas classified as especially vulnerable due to their issues with crime and socio-economic problems told The Local the number of cops in the area needs to double to make a real difference.

“In Botkyrka we've almost doubled the number of people employed in the last two years but to make a real difference you could double that figure again. Then we could make a substantial difference in a much shorter time. There's a huge need of resources there,” Roger Kämpe said.