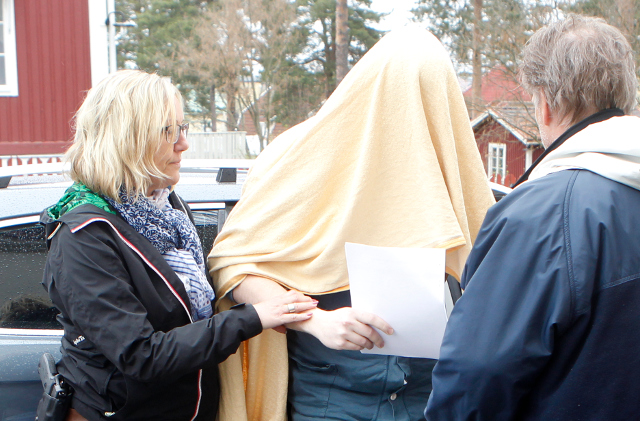 The man being escorted to court by police officers. Photo: Mats Andersson/TT

Tova Moberg, 19, left her home in the small town of Njutånger in Hudiksvall municipality, eastern Sweden, on a Saturday evening in May. She was reported missing by her family when she did not return home the following day. A few days later her body was found hidden in a lake.

Her 22-year-old ex-boyfriend, who was shortly thereafter arrested on suspicion of killing her, went on trial last month. He had previously been reported to the police for assaulting her, and she had recorded several violent incidents in her diary.

On Thursday the district court ordered the man to undergo a comprehensive psychiatric evaluation. According to Swedish court practice this indicates that he will likely be handed a guilty verdict and the assessment will determine whether he is sentenced to closed psychiatric care or prison.

In the event of the latter, prosecutor Christer Sammens has urged the court to lock him up for life.

“He exposed this girl to such extensive violence. She was in a desolate place, had absolutely no chance to protect herself, and he brutally and ruthlessly punched her,” he told the TT newswire.

An investigation of the body showed that Moberg had been strangled and hit 20 times with a hammer. However, police have found no DNA or other traces of the 22-year-old on her body.

The man denies murdering her and his lawyer criticized the court’s decision.

“I think the evidence is not enough for a conviction,” lawyer Bo Karlsson told TT.

“In order to conduct this kind of psychiatric evaluation, it is required for the court to have tried the question of responsibility and found that there is convincing evidence. So by announcing this decision we actually know that there will be a murder conviction,” he explained.

But the prosecutor argued there is enough evidence to “completely rule out” that anyone else murdered her, mentioning blood stains found outside his house and that he had attempted to burn his clothes.

“There’s clothes that belong to this man, how he has acted, that he has forbidden people to come (to his house on the night of the murder) and his movements that night – all of this only leads to the conclusion that it is him,” said Sammens.

Moberg’s diary was also used as evidence in the trial. In it, she described an abusive relationship where whe was not allowed to see her friends and feared that the man would eventually kill her.

One entry describes an argument after he found out she had a secret account on Snapchat.

“I have never taken such a beating before. But there’s nothing I can do. He says that if I break up with him he’ll kill me, I dare not take that chance,” she wrote according to the investigation.