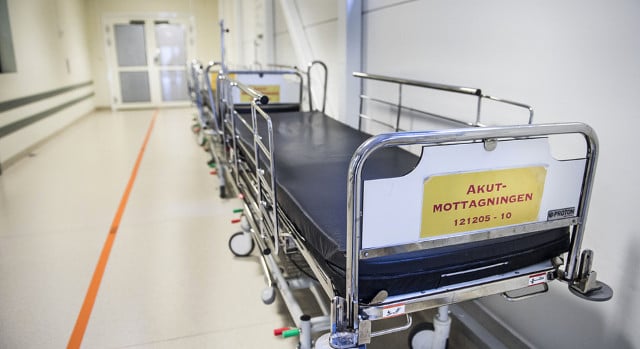 On Thursday Sahlgrenska University Hospital revealed it had closed the children's emergency ward temporarily after detecting a ninth suspected case of measles, which it has been battling since December 10th.

The confirmed number of infections in the city has now risen to 10, with the majority of the cases being people who had contact with someone who sought help at the hospital on December 10th.

“We can say that it’s a mixture of different people who have been infected, both children and adults,” Peter Ulleryd, a deputy infections doctor in Västra Götaland county told newspaper Göteborgs Posten.

“The likelihood of there being more cases is high. Measles are so contagious that sitting in the same waiting room or being present in the same room is enough to be infected,” he continued.

The hospital is trying to track down those who may have been infected. Many are believed to have been exposed to the virus, but only a limited number of infections are expected as most Swedes are vaccinated against measles.

Health officials urged those who are not vaccinated to get the measles jab, but told people who believe they may have been infected to stay at home and contact health advice hotline 1177.

“These people should not be in the waiting rooms due to the risk of infection. If you still go to our emergency wards you should pay attention to the information signs and additional healthcare staff at the entrance. Their job is to ask about measles symptoms and vaccination status. If they suspect infection the patient will be treated in a separate room,” said Anne Haglund Olmarker, duty hospital chief.

“Because we are tracking down the infection, we may find people who are not vaccinated. They are then offered the opportunity to quickly get vaccinated. Vaccination must take place within three days of infection,” she added.

The first symptoms are high fever, a severe cough and red eyes, followed by a rash.

Sweden has offered vaccination against measles since 1971 and as part of the MMR jab (measles, mumps and rubella) since 1982. More than 97 percent of two-year-olds are today vaccinated.