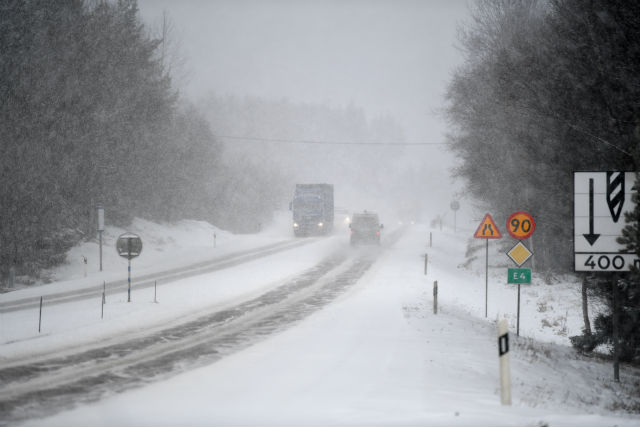 File photo of snow on the E4 earlier this year. Photo: Fredrik Sandberg/TT

National weather agency SMHI issued a class-2 warning on Saturday for a snowstorm that's expected to hit the Jämtland region on Sunday.

A class two warning is the second most severe on the agency's three-tiered warning system.

The agency predicted winds of 24m/s to 28m/s in both Jämtland and Västernorrland, both in central Sweden. Popular ski resorts Åre and Vemdalen are both in the danger zone.

SMHI warned that the strong winds would make it very difficult to even stand upright, urging skiers to stay off the mountains. It added that the winds could reach hurricane strength.

Temperatures are expected to reach -8C.

The area has seen heavy snowfall in recent days, with experts warning that the strong winds could also cause avalanche risks.

The agency issued a less severe class-one warning for the southern reaches of Sweden, where storms are expected to pass through over the weekend.