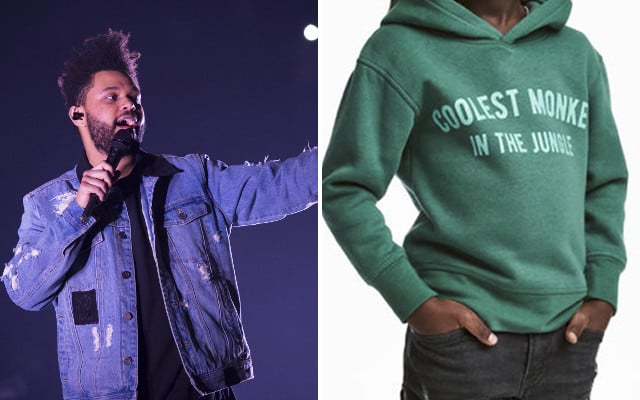 The Weeknd (left) was critical of the H&M ad. Photo: Scott Roth/AP

Canadian singer The Weeknd ended his partnership with the Swedish clothing giant after it caused outrage by releasing an advert featuring a black child wearing a “coolest monkey in the jungle” hoodie.

The company apologized on Monday following accusations of racism on social media regarding the advert. The Weeknd – real name Abel Makkonen Tesfaye – subsequently tweeted that he was “shocked and embarrassed” by the image and would not work with H&M again in the future.

woke up this morning shocked and embarrassed by this photo. i’m deeply offended and will not be working with @hm anymore… pic.twitter.com/P3023iYzAb

The multiple Grammy Award-winning performer, who has had several number one albums in the US and Sweden, previously worked on two collaborations with H&M, the second of which was released in the autumn of 2017.

He was not the only high profile figure to criticize the advert. Rapper and businessman Sean Combs also took aim, calling for more “respect” from the fashion brand.

Put some respect on it!! When you look at us make sure you see royalty and super natural God sent glory!! Anything else is disrespectful. pic.twitter.com/QVaxgngwh1

Basketball icon LeBron James said the Swedish company had “got us all wrong!”.

@hm u got us all wrong! And we ain't going for it! Straight up! Enough about y'all and more of what I see when I look at this photo. I see a Young King!! The ruler of the world, an untouchable Force that can never be denied! We as African Americans will always have to break barriers, prove people wrong and work even harder to prove we belong but guess what, that's what we love because the benefits at the end of the road are so beautiful!! #LiveLaughLove❤️ #LoveMyPeople??????‍⚖️??‍⚖️

And Manchester United striker Romelu Lukaku also responded to the ad, posting an edited version on his Instagram profile.

You’re prince soon to be a king ?? Don’t let anybody tell you different … #blackexcellence

On Tuesday afternoon H&M released a statement saying it had withdrawn the hoodie from sale and would “thoroughly investigate” to make sure there is not a repeat of the incident.