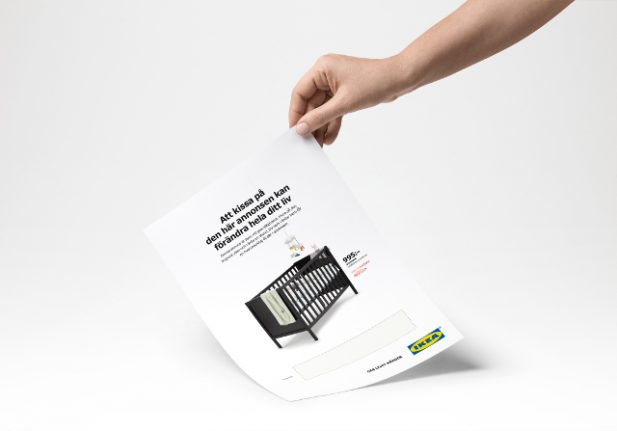 'Peeing on this ad can change your entire life'. Photo: Ikea

Part of their “where life happens” campaign, the company revealed the new installment with a video preview called “pee on this ad”.

Perhaps unsurprisingly, it has received a wave of international attention in response.

The print ad in question works as a pregnancy test, except that rather than revealing a symbol, it reveals text relating to one of the company's products. If the person whose urine is applied to the ad is pregnant, a discounted “Ikea family price” will appear, entitling them to buy a Sundvik crib for less than the standard amount.

And the ad genuinely works as a pregnancy test, thanks to new tech from Swedish chemical manufacturer Mercene Labs, Felix Östman from Ikea Sweden’s press department explained to The Local.

“It does. In order to make the interactive function in the advert possible we had to make several technical advances. As a starting point we used pregnancy test sticks.”

“The colour change is based on antibodies which bind to the pregnancy hormone hCG. In order to scale up the technology as well as make it work in the format of a printed ad, Mercene Labs used its experience developing surfactant materials for microfluidics and medical diagnostics. Creating a controlled capillary action and well-balanced choice of materials were critical components to the project’s success,” he added.

It is hoped that the technological advancements made while producing the ad can be used in medical diagnostics going forward.

Printed in limited numbers in Sweden (that extra technology isn't cheap), the ad appears in magazines including Amelia. Reactions on social media have been mixed, ranging from praise for the ingenuity to concern for the employees who have to handle the returned coupon.

The stunt even made it to the US late night talk show circuit, with Jimmy Kimmel calling it “either the most creative or repulsive ad for baby furniture of all time”.

“The reaction has been overwhelming, and inspired us to continue surprising and entertaining with the 'where life happens' campaign,” Ikea's Östman concluded.