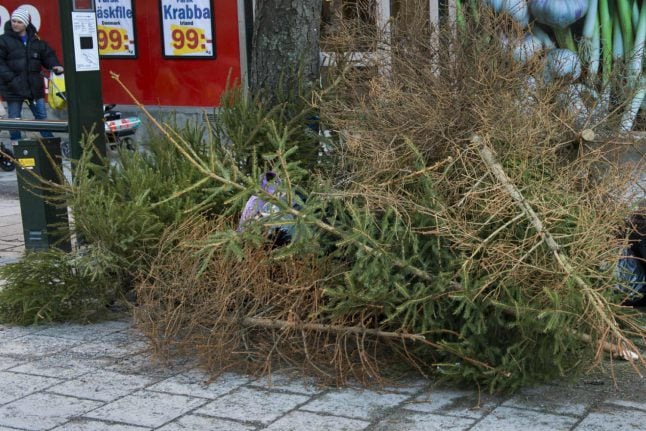 But the Knut’s Party (julgransplundringarna, literally, Christmas tree plundering) tradition may soon be as distant a memory as Christmas itself.

St. Knut’s Day, January 13th, traditionally marks the end of the holiday season in Sweden and is the day St. Knut helps to “drive Christmas away”.

But explaining exactly how the tradition arose and why is less simple than a trip to the wood chipper’s.

“There is probably no simple explanation as to why it turned out the way it did,” ethnologist Jonas Engman of Stockholm’s Nordic Museum told TT.

In fact, it is not even certain which Knut the tradition refers to. One theory suggests that Danish prince Canute Lavard, who was murdered on January 7th 1131 and later declared a saint, is honoured by the day. Others, though, point to the Lavard’s uncle, King Canute IV of Denmark.

Celebrating the end of Christmas on January 13th is a tradition restricted to the Nordic countries, primarily Sweden along with parts of Norway and Sweden. For most of the rest of Europe, the festive season is considered to come to an end on January 6th.

“We previously ended Christmas on the 13th day [after December 24th, ed.], but due to the calendar reforms [to adopt the Gregorian calendar in the 1700s, ed.], we have also moved the end of Christmas. We are pretty much the only ones to have done it. Exactly why, there’s no simple or good explanation for. That’s just how it went,” Engman said.

In practice, the thirteenth day after Christmas, rather than January 13th, is the end of the festive season for Swedes as it is in many other countries, being the marker for most people to return to work and for the new school term.

Nevertheless, Christmas trees and decorations lasting an extra week into January is not uncommon.

St. Knut’s Day is traditionally celebrated by throwing out Christmas trees, which are presumably severely lacking in needles after several weeks spent inside homes, preceded by one last Christmas dance around the tree. Any remaining edible decorations are also eaten.

But trends suggest the practice may be withering a little.

“You cannot say it is a day that is growing in importance,” Engman said.

Old Christmas trees can usually be deposited as garden waste at recycling stations.

READ ALSO: 16 traditions you need to follow to fake being a Swede at Christmas