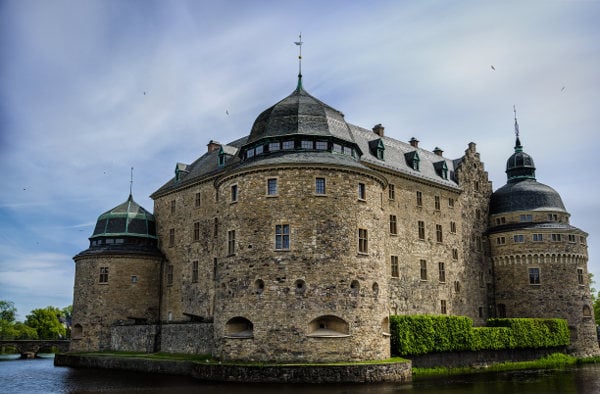 European castles were mainly used for military battles and Sweden is no different. During the medieval times, the country was split into provinces. As a result, Sweden had many castles built through the renaissance and medieval periods, and these are only five of the best.

This medieval castle lies along the old Norwegian-Swedish border in Kungälv. The dominating structure was constructed by Norwegian king, Haakon V Magnusson in 1308. Its main purpose was for military defence of Norway against Sweden. The Bohus Fortress is widely considered as one of the best designed and preserved in the country.

Back in its prime, prisoners would have suffered hellish torment in its pitch-black dungeons, and the courtyard there is still a well-preserved, built by the toil of condemned prisoners. Today, the site is a popular destination for excursions from Gothenburg.

The word Örebro translates as “a bridge over a gravelled river”, which defines this castle well as it was previously a logistics center which kept track of every ship crossing the bridge on River Svartån.

Örebro Castle in its present form was built by King Karl IX of Sweden and consists of four three-storey ranges surrounding a courtyard with a round tower in each corner.

It was once considered to be one of the strongest defensive castles in Sweden during the medieval period. The fortress is supposed to have consisted of a defence tower with a surrounding wall, but no one knows exactly when it was built.

Many important events in Swedish history took place here. It has been the residence of the county governor for over two hundred years, but a great deal of the castle is open to the general public, with food, exhibitions, guided tours and conferences all part of the day-to-day activities.

The castle is located in Örebro City, the sixth largest in Sweden and one of the largest inland hubs in the country.

READ ALSO: This Swedish castle, yours for the price of a tiny flat

Eketorp is a picturesque fort located in Öland. In fact, the whole of the southern Öland area has been designated as a UNESCO World Heritage Site because it showcases outstanding examples of an ancient human settlement.

This castle is an ancient masterpiece which was built in three settlement phases, two in the Iron Age and one in the Middle Ages. Here, you can experience how people lived in the past and how houses were created in the Iron Age of history.

Eketorp is the only one of the 19 known pre-historic fortifications in this area that has been completely recovered, producing a total of over 24,000 individual artifacts.

One of best known of all the castles in Sweden, located in the south of the country a few hundred kilometres from Stockholm. It is firmly embedded in the tourist trail as it houses Sweden's national collection of portraits.

Located in Mariefred, a picturesque town on Lake Mälaren, this renaissance castle offers romantic grounds, a nature reserve and collections of furniture and interiors from four centuries, including King Gustav III's theatre.

The approach to Gripsholm is particularly memorable, as most tourists arrive by paddle steamers. Sadly, the castle suffered significant and unsympathetic renovation during the late 1800s, destroying some of its character by adding a rather ugly third floor.

READ ALSO: This palace is for sale, moat and all The permanent residence of the Royal Family since 1981 and one of Stockholm's three World Heritage Sites, those are just two of the reasons why this location is one of the most visited sites in Stockholm. The palace is also Sweden’s best preserved Royal palace.

The present structure at Drottningholm was constructed according to a French prototype by the architect Nicodemus Tessin, by order of Queen Hedvig Eleonora. Many royals have left their marks on the palace since its establishment. It also features magnificent salons from the seventeenth, eighteenth and nineteenth centuries, a park, a unique palace theatre and a Chinese Pavilion. The palace and the park are mostly open to visitors all year round.

Drottningholm Slottsteater (the palace theatre) is the best preserved eighteenth-century theatre in Europe and the only one in the world that uses the original stage machinery on a regular basis. In 1991, this palace became the first Swedish attraction to be put on UNESCO’s list of World Heritage Sites.