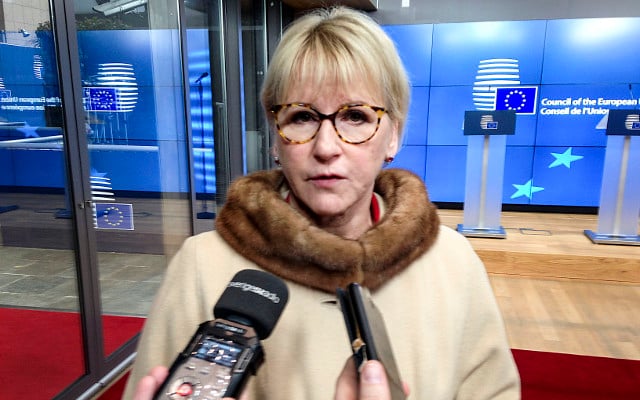 The case of Hong Kong-based Gui Minhai, 53, has sparked a diplomatic spat between Stockholm and Beijing, with Chinese authorities declining to give any details about his whereabouts amid concerns about his health.

His daughter, Angela Gui, has said that he was detained by around 10 plainclothes police on Saturday while on a train to Beijing from the eastern city of Ningbo, where he was living, while accompanied by two Swedish diplomats.

Her father had been travelling to Beijing to see a Swedish doctor as he was showing symptoms of the neurological disease ALS, also known as Lou Gehrig's disease, she added.

“We expect the Chinese authorities to immediately release Mr. Gui Minhai from detention and allow him to reunite with his family, to get consular support and to get medical support,” EU ambassador Hans Dietmar Schweisgut said at a news conference in Beijing.

Swedish Foreign Minister Margot Wallström had called for Gui's release on Tuesday, saying he should “be given the opportunity to meet Swedish diplomatic and medical personnel”.

His apparent arrest comes as civil society has come under increasing pressure in China since President Xi Jinping took office in 2012, with authorities rounding up hundreds of lawyers and activists.

One of five Hong Kong-based booksellers known for salacious titles about the lives of China's political elite, Gui first went missing in 2015 while on vacation in Thailand and resurfaced at an undisclosed location in China.

Chinese authorities said they had released Gui in October, but it was unclear to what extent he was a free man after serving a jail sentence over “a traffic incident”.

Wallström, who summoned China's ambassador to Stockholm twice within three days, confirmed that Gui was again “arrested by Chinese authorities” in the presence of diplomatic staff who were “assisting a Swedish citizen in need of medical care”.

She added that international rules give the diplomatic staff the right to provide a Swedish citizen with consular support and raised alarm over his detention, which took place “without further explanation”.

The Chinese foreign ministry said on Tuesday that it was “not aware of the details” of the case and that the issue was out of its “remit”.

But ministry spokeswoman Hua Chunying added that “any foreigner must observe Chinese laws and regulations. This is common sense”.

She also dodged questions about whether China and Sweden had discussed the case.

“Communication channels between China and Sweden are smooth and effective. We can exchange opinions on issues of mutual interest.”

In February 2016 after his first disappearance, Gui appeared on Chinese television, weeping as he confessed to involvement in a fatal car accident years before.

Amnesty International described Saturday's incident as “absolutely appalling” and called for Gui to be released and allowed to seek medical treatment.

The fact that he had been snatched in front of diplomats should be a “wake up call” to the international community, said Amnesty's China researcher William Nee.

China was widely criticised after veteran Chinese rights activist and Nobel Laureate Liu Xiaobo died from liver cancer while on medical parole on the mainland in July last year.

Rights groups had pushed for him to be allowed to seek medical treatment abroad.