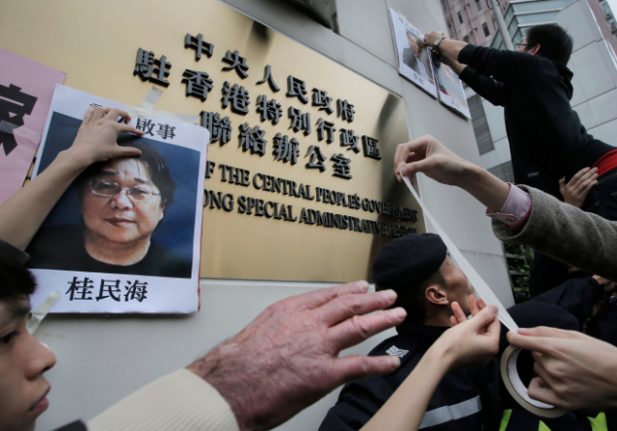 File photo of Gui Minhai. Photo: AP Photo/Vincent Yu
“We are deeply concerned that Swedish citizen Gui Minhai was detained,” Heather Nauert, a State Department spokeswoman, said in a statement.
“We call on Chinese authorities to explain the reasons and legal basis for Mr. Gui’s arrest and detention, disclose his whereabouts, and allow him freedom of movement and the freedom to leave China,” Nauert continued.

We are deeply concerned that Swedish citizen Gui Minhai was detained on Jan. 20. We call on Chinese authorities to explain the reasons and legal basis for Mr. Gui’s arrest and detention and allow him freedom of movement and the freedom to leave #China. https://t.co/t3s489VnYp

Gui, who was released from detention by China last autumn after two years in custody, was seized in a dramatic arrest on a train bound for Beijing last week.
The 53-year-old Gui was reportedly en route to the Swedish Embassy to receive medical treatment after showing symptoms of ALS, a disease which attacks the brain and spinal cord, when ten men stormed the train at a station and took him with them. According to his daughter, Angela Gui, Gui Minhai was detained by around 10 plainclothes police officers. He was reportedly traveling with two diplomats from Sweden's Shanghai consulate.
Swedish Foreign Minister Margot Wallström has called for Gui's release, saying he should “be given the opportunity to meet Swedish diplomatic and medical personnel”. The European Union's ambassador to China has also called on Beijing to “immediately” release the Hong Kong-based publisher.
Nauert's statement said that the State Department would work with its “partners, allies and regional organizations on promoting greater respect for human rights in China.”
Gui previously disappeared in 2015 while on holiday in Thailand. He was held at an undisclosed location in China until he was formally released in October last year. It was unclear, however, to what extent he was a free man after serving a jail sentence over “a traffic incident”.
Gui, who went to study in Sweden in 1988 and became a citizen in 1992, was one of five Hong Kong booksellers known for publishing gossipy titles about Chinese political leaders to go missing in 2015.
In 2016, he resurfaced on Chinese television saying he had returned to take responsibility for his involvement in a fatal car accident years before in Zheijiang province, a confession dismissed by human rights campaigners. The other four people have been released.