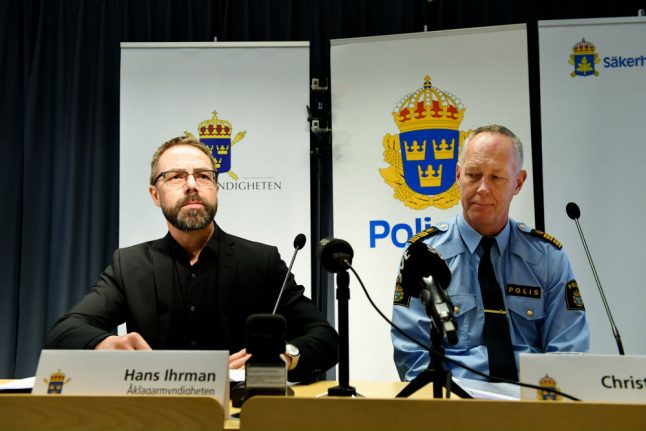 Prosecutor Hans Ihrman and Christer Nilsson from the Swedish police's national division. Photo: Henrik Montgomery/TT
The video came a day after Akilov had sent another video to a contact in which he pledged allegiance to the terror group Islamic State (Isis).
The videos form part of a mass of evidence collected during the investigation, which Hans Ihrman, the lead prosecutor in the case, argued on Tuesday left little doubt that Akilov's intention was to terrorize the Swedish population.
“He wanted to punish Sweden for taking part in the global coalition against IS,” Ihrman said, adding that the evidence suggested that Akilov had been a supporter of Islamic terror long before the attack.
Ihrman handed the indictment to Akilov in prison at 10am on Tuesday, after which he held a press conference to explain the charges.
He said Akilov had clearly aimed to terrorize Sweden's population for political ends, revealing that he had been in online contact with at least 13 people with radical Islamic links.
According to the preliminary investigation document, Akilov remained in contact with two of them right up to the day of the attack, sending one man, named “Abu Omar”,  a photo of the bomb he had prepared, a photo of himself inside the hijacked truck before the attack, and photos of his bleeding hands afterwards.
“My trousers are burned. I thought it was going to explode but it didn't,” he wrote on the app Zello. “Around ten are dead.”
In the press conference Ihrman said that Akilov had been radicalized months before the attacks.
“Concerning his radicalization, that is something that will be laid out with the desired precision during the trial. He had been radicalized, and he had not just been radicalized immediately before the attack. We can say that much.”
Ihrman vowed to push for a sentence that would keep Akilov off Sweden's streets for the rest of his life.
“My goal is that he should never be able to move freely in our society ever again,” he said.
In the indictment, Akilov is charged with terrorism, attempted terrorism, and causing danger for others, according to the documents released on Tuesday.
Akilov has confessed to committing a terror attack on  April 7th, by driving a truck along Drottninggatan,  a busy pedestrianized street in central Stockholm, killing five people and injuring many more. No fewer than 155 people are listed as plaintiffs in the indictment.
After the indictment, Akilov's defence lawyer Johan Eriksson said his client planned to plead guilty to both the murder and terror charges.
“He admits to attempting to carry out a terrorist offence consisting of trying to kill a large number of people on Drottninggatan,” he told a press conference on Tuesday afternoon.
Eriksson warned that his client was at risk of suffering psychological harm, because of the strict regime of his pre-trial detention.
“People should know that he is being treated in an extremely strict way,” he said. “Since April 7th, he's been under so called 'second-observation', which means that he is under observation 24 hours a day. It's very stressful and that risks affecting him psychologically.”
Eriksson also revealed that the police had taken Akilov back to Drottninggatan during their investigation.
“It was a normal weekday morning, without anyone noticing it,” he said. “It was done very discreetly.”
READ ALSO: All The Local's articles about the Stockholm truck attack
According to the indictment, Akilov also attempted to detonate a home-made shrapnel bomb constructed out of five butane gas canisters, surrounded by screws, a knife blade and other metal objects.
In the summons application, prosecutors said that the attacker had hoped to affect Sweden's involvement in the fight against the Islamic State terror group, which has not claimed responsibility for the Stockholm attack.
“It was even part of the purpose to force the government and parliament to break off Swedish cooperation in military training programmes carried out as part of the global coalition against Islamic State (Isis),” the document reads.
Ihrman said that the attack had been planned months in advance, right down to the choice of day.
“The choice of weekday was probably planned,” he said. “We have seen that he carried out reconnaissance in Stockholm on other Fridays. This points to the fact that Friday had been interesting, probably because there were a lot of people out and about.”
According to the investigation documents, on January 16, Akilov swore allegiance to Islamic State during a an online chat with one of his contacts, contacting another contact on January 19 to say he wanted to carry out a terror attack.
The documents published on Tuesday include photographs Akilov had taken in March of the area where the attack took place, including Drottninggatan, and nearby Hötorget Square as he sought to identify a suitable place for an attack.
The police investigation found that Akilov had googled the phrase “gay club Stockholm” and investigated the popular ferries from the city and Vaxholm in the Stockholm archipelago. He also carried out internet searches for chemicals that can be used to make explosives.
The investigation has taken nine months to carry out, and the preliminary investigation released on Tuesday runs to 9,000 pages and includes 1,700 separate interviews.