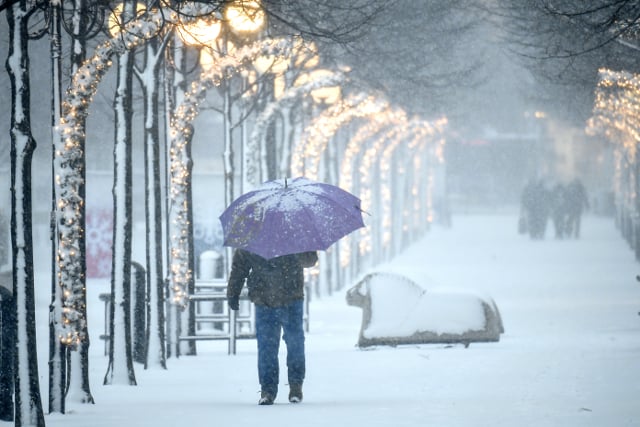 More snow is expected to fall in parts of Sweden. Photo: Anders Wiklund/TT

“We want to warn right now that the weather could get messy, with large amounts of snow,” Marcus Sjöstedt, meteorologist at Sweden's national weather agency SMHI, told the TT newswire.

Southern Sweden should expect wet snow and rain, while snow is predicted for central regions, especially on higher ground – with class-one alerts (the least serious on a scale from one to three) in place for most of the region on Wednesday. Stay up-to-date with SMHI's weather alerts here.

Mountainous regions in Western Norrland could get up to 10 centimetres of new snow on Thursday.

“It will also be somewhat windy which could cause drifting snow,” said Sjöstedt. How much snow is too much snow for biking to work? Photo: Hossein Salmanzadeh/TT

On Thursday heavy snowfall is expected in the central eastern Gävleborg region. However, SMHI has not yet issued a formal warning, saying the forecast could still change in the coming days.

“But it corresponds to a class-two warning. It could be in total 30 to 50 centimetres of new snow, and strong wind,” said Sjöstedt.

SMHI also warns of windy conditions at sea, strong winds and drifting snow in mountainous regions in northern Sweden from Wednesday, and flooding in southern and central Sweden.