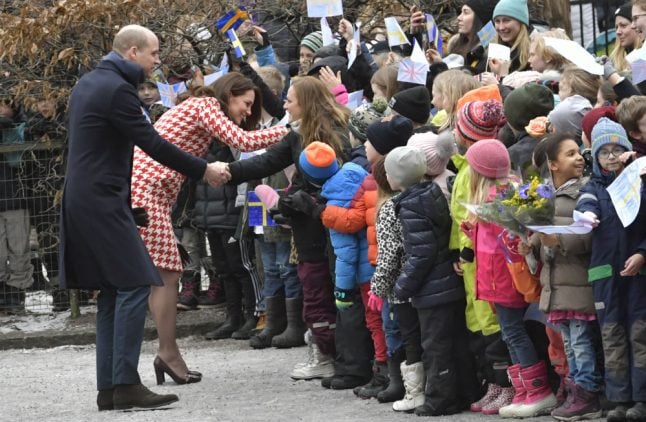 The Duke and Duchess of Cambridge greet children at Stockholm's Matteusskolan. Photo: Jonas Ekströmer/TT
The Duke and Duchess of Cambridge quietly let slip their secret passion for Swedish flatpack furniture slip during a visit to Stockholm’s National Museum of Architecture and Design on the first day of their tour of Sweden and Norway.
“They have Ikea pieces for the children’s rooms,” said Marcus Engman, the company's head of design, who had been leading Prince William and Kate Middleton around an exhibition of work by young Swedish designers.
“I'm proud that we can suit everybody. That's what we want Ikea to be, for the many people of the world, both royalty and ordinary people.”
The couple began their visit to the museum by commiserating Engman on the death on Saturday of Ikea’s founder Ingvar Kamprad.
The couple began the second day of their tour on Wednesday with a visit to Stockholm’s prestigious medical university Karolinska Institutet, where they met Sweden’s Crown Princess Victoria and Prince Daniel, with kisses and embraces. They then met experts for a discussion on Sweden’s approach to mental health.
The royal couple were then whisked over to Matteusskolan school in central Stockholm, where they were greeted with flag-waving children, before meeting Sweden's education minister Gustav Fridolin.
After the visit, they stopped off at the 19th-century Haga Palace, the official residence of Sweden's Crown Princess couple, where they bonded over a private tea.
On Wednesday afternoon, the two British royals were headed to another star-studded reception at Stockholm's Fotografiska gallery.
Read an account of the couple's first day in Stockholm here.